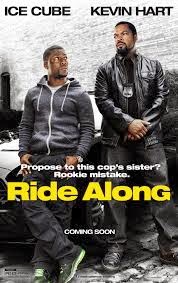 Did you see last year's THE HEAT? If you did, I'd offer my condolences, but since I had to sit through it as well I feel more empathy than sympathy. Anyway, RIDE ALONG is this year's model, another lazy, laughless, by-the-numbers collection of buddy cop comedy cliches disguised as an actual movie.

This time around the mismatched partners are the video game addicted rent-a-cop Ben (Kevin Hart), and stone cold super cop James (Ice Cube). Wouldn't you know it, Ben's girlfriend Angela (Tika Sumpter) just happens to be James' sister. Ben wants to marry his girl, but in order to do that he first needs to get her brother's blessing. But of course, James doesn't much like Ben, and even when his prospective brother-in-law makes it into the police academy, all he wants to do is find a way to get this guy out of his sister's life.

The only thing James wants more than to be rid of Ben is to take down a mysterious criminal mastermind known only as Omar. No, not that Omar The Wire fans. I'm not going to tell you who plays him since that would be a spoiler, and I don't like giving spoilers even for crappy movies, but it's a good actor slumming it. I'd say the same about John Leguizamo as one of James' fellow officers, but despite being a pretty good character actor, Leguizamo slums it so often it hardly bears mentioning. Hey, we all gotta' eat.

Anyway, the plot is that James takes Ben on a ride along with the intent of putting him into situations that are difficult to deal with but relatively safe. His hope being that Ben will fail so spectacularly at handling these situations that he'll break up with Angela and give up his hopes of being a cop. Of course some of that happens, but eventually circumstances lead to Ben getting involved in the hunt for Omar.

I really didn't laugh once during this movie. Other people at the screening I attended did, so maybe your mileage will vary. I can only report on my experience, and that experience was pretty excruciating. There isn't an original bone in this movie's body, and while I don't expect a buddy cop movie to re-invent the wheel, I do expect the stars to at least have some chemistry, the jokes to be funny, and the crime plot to be at least moderately engrossing. RIDE ALONG failed on all counts for me. 1 out of 4 stars.
Posted by Bob Ignizio at 12:23 AM