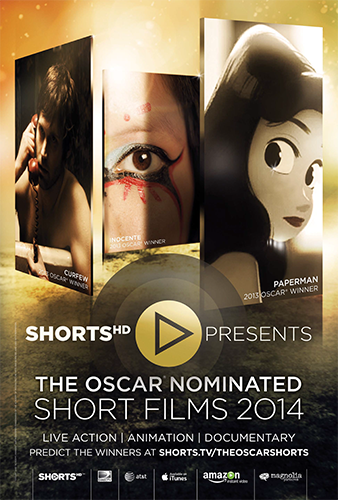 “Good things, when short, are twice as good,” wrote the Spanish philosopher Baltasar Gracián. That has never been more true than now, as feature films get ever longer, and watching them requires a willingness to sit still for three hours or more. That requires a lot more time and patience than I have.

For that reason, I've always loved the short form – half-hour sitcoms, short stories and short films. Often while I'm watching a feature-length movie, I think about how much better it would be as a twenty or thirty-minute short. Lose the pop-music montage, the car chases, the digressions and repetitions, and just focus on telling a story succinctly.

I developed this love of short films because of Cleveland Cinemas' annual showing of the Oscar-Nominated Shorts. It's a great opportunity to compare the styles of filmmakers from various countries, and to think about the eloquence of the short-form narrative. You can also make bets with your friends as to which one will take the Oscar. (I am almost always wrong.)

This year's nominees in the Live Action Shorts category are from Finland, Denmark, France, Spain and the UK. Apart from Finland's lighthearted entry, Do I Have to Take Care of Everything? the themes are dark.Grimmest of all is That Wasn't Me (Aquel No Era Yo), written and directed by Esteban Crespo of Spain. The 24-minute film concerns a group of Spanish doctors (including one woman) working in Africa. Their vehicle is stopped by gun-toting militants, some of whom are mere boys, who take them captive and subject them to terrifyingly brutal violence. Told in flashback, the film is a surprisingly hopeful tale of redemption.

The Voorman Problem, a 13-minute film from the UK directed by Mark Gill, is a clever supernatural story involving a psychiatrist who is called in to examine a straitjacketed prisoner who believes he is a god. The prisoner, Voorman, claims to have certain powers, but the straitlaced shrink isn't buying it. This Twilight Zone-like film has fun with the idea of Belgium; it's the second instance in film history (the first being THE THIRD MAN) that that country was deemed insignificant.

Miriam, a wife and mother in France's Just Before Losing Everything, gathers her children and takes them to her workplace, where she begins organizing their hasty exit from town. The suspenseful thirty-minute film, directed by Xavier Legrand, very gradually reveals the reasons for Miriam's flight, focusing on her anxious but careful preparations — quitting her job, arranging for cash, and evading a dangerous predator.

The masterpiece of the group is Denmark's Helium, in which a compassionate hospital janitor takes an interest in a young dying boy who tells him he doesn't want to go to Heaven. Heaven, says the bright, doomed child Alfred, sounds like a boring place. Enzo, the janitor, suggests an alternative destination, a planet called Helium, an idea inspired by the presence of a beloved toy airship hanging above Alfred's bed. Enzo elaborately describes the idealized place to Alfred, and although at one point he worries about “telling him lies,” the janitor's stories help ease the child's transition, which is portrayed in the most beautiful way imaginable.

For a certain type of quirky sweetness — and with apologies to Rodgers and Hammerstein — there is nothing like a Dane. Helium is my pick for the award, but please, don't go by me (see above). Go and see these films, as well as the Animation and Documentary shorts, and root for your own favorites.
Posted by Pamela Zoslov at 12:14 AM