Men at Lunch (January 8th at the Cleveland Museum of Art)

[MEN AT LUNCH screens Wednesday January 8th at 7:00 pm at the Cleveland Museum of Art.]
Review by Bob Ignizio 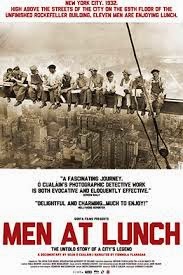 MEN AT LUNCH purports to tell the story of an iconic photo taken in 1932 that depicts a group of iron workers casually enjoying their lunch some 840 feet above street level while sitting on a girder of what will eventually be the RCA Builiding at 30 Rockefeller Plaza, New York City. Not much is known about who took the photo or the people in it as director Seán Ó Cualáin begins his film, and although there is much speculation, not much more is known by the time his film concludes. The film asserts that such knowledge isn't really important to understanding the significance of the photo and what it represents, and it makes a reasonable case to that effect. But then, why spend so much screen time on leads that ultimately can't be verified?

Ó Cualáin does his best to keep things interesting by examining the historical context of the photo, the facts of working class life at the time, interpretations of what the photograph says about American culture and, in particular, the immigrants experience, and the various ways the iconic photo has influenced subsequent art and culture. As much as he tries, however, he can't quite stretch it out to feature length.

It's obvious that considerable time, effort, and research went into making this documentary. In particular, one has to appreciate that the original negative for the photograph is tracked down and verified to be the real deal, and not the result of trick photography as has on occasion been suggested in the past. It's also worthwhile to have tracked down possible leads on the identity of the photographer and some of the subjects in the photograph, at least two of whom can be verified thanks to other photos taken on the same day that include their names.

On the downside, far too much time is devoted to the claims of two Irish cousins that two of the men in the photo are their respective fathers. They may well be, and certainly both men's fathers were iron workers in New York City around the time the photo was taken. In the end, though, their claims are only marginally more substantial than those of countless others who are certain that the men in the photo are their grandparents, uncles, great cousins, or whatever.

The story of the iron workers who risked their lives to build the skyscrapers of New York City is one worth telling. In fact, that's the documentary Ó Cualáin should have made. Instead, he tries way too hard to tie everything in to the photo, and in the process winds up spending too much time on filler. There's probably a good 30 minute show for the History Channel or something on here about the photo, and the material is certainly not without interest. It's just a shame that the seeds of something bigger are here as well, and yet they never bear fruit. 2 ½ out of 4 stars.
Posted by Bob Ignizio at 12:33 AM