*Note: to the best of our knowledge, MACHETE KILLS was not screened for critics. Normally Bob, an unrepentant fan of trash cinema, would have gone to see it on opening weekend anyway, but for whatever reason that didn't happen, either. Now that the movie is out on home video, however, there's no excuse for not giving it a look and a review.] 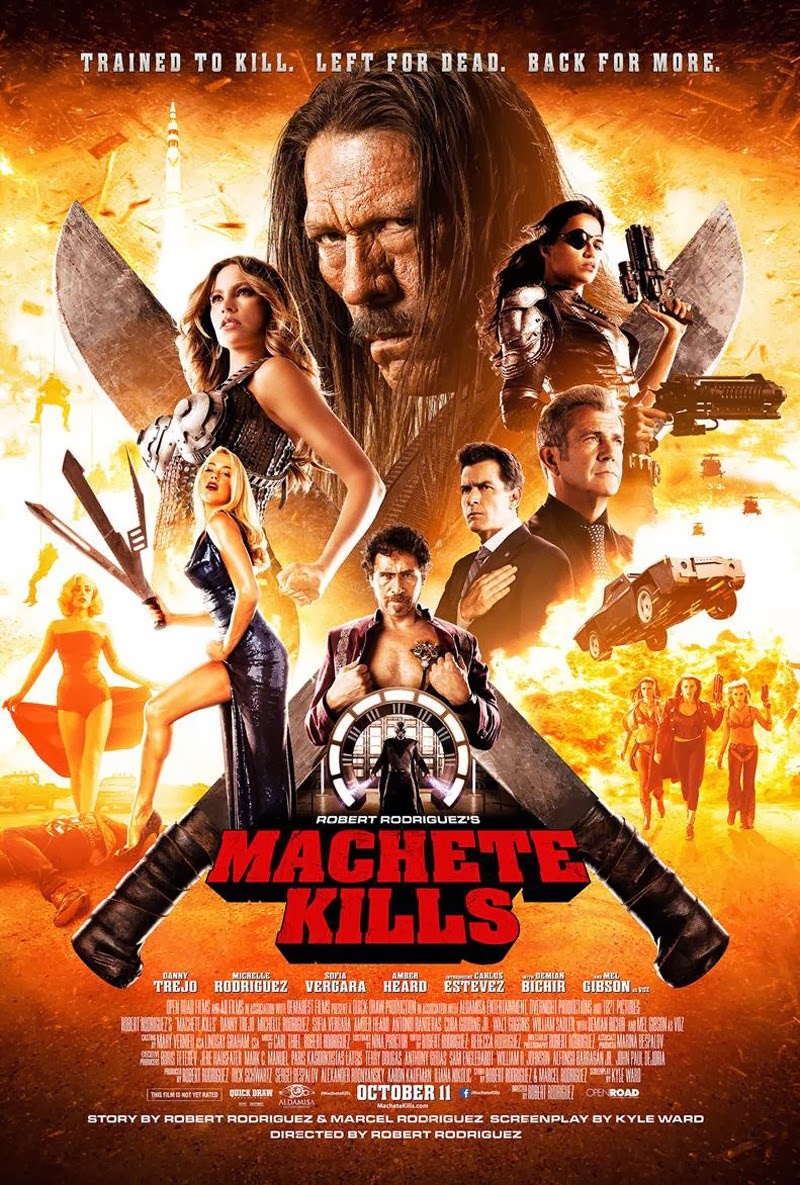 Danny Trejo returns as the titular former Mexican Federale turned mercenary with a conscience in MACHETE KILLS. And indeed, the film lives up to its name as Trejo leaves a trail of bodies in his wake. The plot driving the carnage is that Machete has been charged by the United States President (Carlos Estevez aka Charlie Sheen) to take out Mexican bad guy Marcos Mendez ((Demián Bichir). The problem is, Machete can't just kill the schizophrenic villain as his heart is wired to the detonator for a nuclear missile. If he dies, the bomb flies. It also soon becomes apparent that Mendez isn't the real evil mastermind; that would be Luther Voz (Mel Gibson), a corrupt businessman and inventor who apparently has enough money to play MOONRAKER for real.

The colorful cast of supporting players includes Machete's returning allies Luz (Michelle Rodriguez), Sartana (Jessica Alba), and Osiris (Tom Savini). New friends and foes include Sofia Vergara as a homicidal brothel owner with a machine gun bustier, Amber Heard as Machete's government handler “Miss San Antonio”, and William Sadler as a racist sheriff who tries and fails to hang our south of the border anti-hero. And then there's an assassin/master of disguise played by, at different times, Cuba Gooding, Jr., Lady Gaga, and Antonio Banderas.

It sounds like a recipe for fun, and a similar mix of high concept and high profile casting worked to good effect in the original MACHETE. The difference is, the first film seemed to have a better handle on striking a balance between serious action storyline and just the right amount of humor, all the while paying homage to the grindhouse and drive-in action movies of the seventies without seeming like a retro rip-off. This time around, things go too far in the direction of self parody and absurdity, the film stopping to wink at the audience every few minutes, but without the courage to just go all the way into comedy.

Driving the final nail into the coffin is the decision to end without reaching an actual conclusion, or even a particularly satisfying stopping point. Those interested in seeing how it all turns out will have to come back for MACHETE KILLS AGAIN... IN SPACE. Apparently the lessons of THE MATRIX RELOADED and REVOLUTIONS have gone unlearned: if you're gonna' make a bad movie, don't split it into two parts and expect people to come back for the conclusion. 2 out of 4 stars.
Posted by Bob Ignizio at 12:48 AM