[LET THE FIRE BURN screens Friday January 17th at 7:30 pm and Saturday January 18th at 9:30 pm at the Cleveland Cinematheque.] 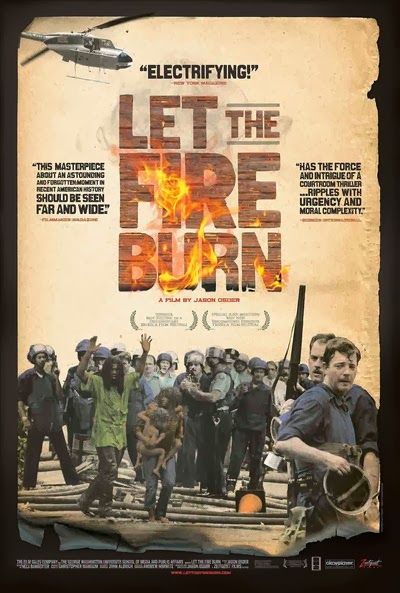 After years of complaints and minor confrontations, on May 13 1985, the city of Philadelphia decided to evict the radical political/religious organization MOVE from their compound at 6221 Osage Avenue. At first neighborhood residents were relieved; they had been complaining about the group for some time. Sadly, that relief soon turned to anger and horror as things went tragically wrong. When the raid was over, 11 members of MOVE (including 5 children) were dead, and an entire neighborhood had been burned to the ground. To paraphrase a famous quote from the Viet Nam War, it was as if those in charge had deemed it necessary to destroy the neighborhood to save it.

The documentary LET THE FIRE BURN sets out to understand how and why this tragedy took place. Usually films like this rely on modern day interviews with survivors which, while compelling, can't do much for the fact that memory can fade or become distorted with time. In this case, however, director Jason Osder had access to an amazing treasure trove of footage of the times and events in questions, as well as an entire filmed inquest into the raid in which all the surviving participants offer their still fresh points of view. There is no need for narration or reenactments; it's all there in the archival footage.

You might expect a film like this to try and make MOVE come off as saints. Thankfully it doesn't. Osder shows the members of MOVE as they were, and very often that makes them difficult to like. Although they not surprisingly reject the pejorative description of religious cult, they certainly come off like one. Charismatic leader with his own divinely revealed rules for living? Check. Members living together in a commune with naked children running around? Check. Strange ideas about diet and santiation? Check. Loudspeakers broadcasting profanity laced tirades throughout the neighborhood? Check. If MOVE had lived on your block, you probably wouldn't have wanted them there, either. The question is, why did removing them come at such a cost?

Despite all the materials collected here, there's only so much LET THE FIRE BURN can answer. In the end, a lot rides on the veracity of the testimony given my the various participants, particularly when there are differing accounts. The inquest and the film still manage to reach their conclusions, which are hardly surprising and hard to disagree with. And of course there's a further sad CODA to it all with regards to the way the city rebuilt the neighborhood. But I'll leave it to you to see the film to learn that disheartening fact. And see the film you should, as this is the kind of important history that tends to get forgotten. And to paraphrase yet another overused quote, when history is forgotten, it's far too easy to repeat it. 4 out of 4 stars.
Posted by Bob Ignizio at 12:34 AM