King: A Filmed Record...Montgomery to Memphis (January 19th at the Cleveland Cinematheque)

[KING: A FILMED RECORD...MONTGOMERY TO MEMPHIS screens Sunday January 19th at 7:15 pm at the Cleveland Cinematheque.] 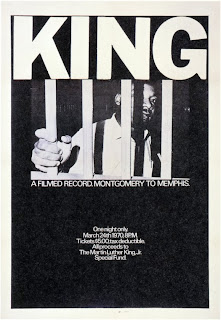 I happened to be reading a 1998 Newsweek article (remember when Newsweek was an actual magazine, on paper?) about the Rev. Dr. Martin Luther King's final years. There I found a revelation I didn't know. It seems that King helped campaign in Cleveland for Carl Stokes' ultimately historic run for mayor of Cleveland. During the Stokes victory celebration, Dr. King was in a hotel room here, expecting to get a call inviting him to attend. The call never came.

Newsweek's spin on this went thus: Dr. King was becoming an increasingly marginal figure in the civil-rights movement, arguably because of the success he and his heroic fellow marchers had in overcoming American racism. Empowered black leaders such as Stokes, `keeping their eyes on the prize,' no longer needed the benediction of an MLK, or a JFK, or an RFK, or a WEB DuBois, or anybody, to have access and equality they should have been getting all long. Thus, King was not invited to the party, and it was actually a positive sign of the changing times for Afro-Americans.

Of course, there’s another: Clevelanders are just SOB ingrates.

See, if other journos were as succinct and to the point as I am, Newsweek might still afford to be published on real paper. Of course, it would only be a few pages long. But so is The Plain Dealer nowadays.

I’m pleased to see that the Cleveland Cinematheque is at least giving Martin Luther King his due with a revival of an Oscar nominee in the Best Documentary Feature category from 1970. KING: A FILMED RECORD…MONTGOMERY TO MEMPHIS, co-credited to Sidney Lumet, is a chronological compilation of epochal news footage and audio recordings about Dr. King’s activist life and martyrdom, presented sans outside commentary (except a poetic intro by Harry Belafonte) that traces the ascent of the civil-rights leader.

The effect is practically biblical as the well-known story comes to life, with early sit-ins at restricted restaurants (“Kruschev could eat in this restaurant. Why not an American Negro?”) leading up to the march on Washington and the "I have a dream..." speech as a dramatic high point. What strikes the modern viewer is Dr. King's philosophy of non-violent resistance at work on the front lines - easy to talk up, but requiring great courage and grace to apply in practice. It’s hard to imagine activists in subsequent generations, or ANY generations, for that matter, going through these rounds of escalating violence and intimidation by screaming bigots, KKK and cops with riot hoses and dogs, and not responding with equal rage. The sense of King's achievements is as mighty as his loss is devastating. It’s important to note how fresh the wounds were when this was made.

I am given to understand that the Cinematheque has snagged a “restored” version of the documentary, with an amped-up running time, fully an hour and quarter longer than the version circulated on home-video. Wonder if there’s a scene, after MLK’s funeral, when someone from Cleveland tries to serve Coretta Scott King with a due bill for the hotel room, because Dr. King loitered in there longer than he thought he would. Just wondering… (3 ¼ out of 4 stars)

Posted by Charles Cassady Jr. at 1:06 AM