[JOURNEY TO PLANET X is currently making the rounds of the festival circuit. It had its broadcast premiere on Epix in May of 2013, and recently became available on Netflix Instant. It may be available elsewhere, but as of now there is no DVD or Blu Ray release, and I haven't seen it on any of the other streaming services I use.] 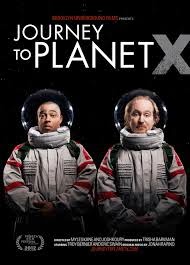 It's not unfair to say that JOURNEY TO PLANET X has a lot in common with the acclaimed 1999 documentary AMERICAN MOVIE (the link will take you to Charles Cassady Jr.'s review on this site). Both films chronicle the efforts of eccentric independent filmmakers with more passion than talent as they try to realize their dreams despite the numerous obstacles in their path. That said, the filmmaking duo of Eric Swain and Troy Bernier profiled in JOURNEY are very different people than AMERICAN MOVIE's March Borchardt.

Taking a cue from their subjects, directors Myles Kane and Josh Koury have crafted a much more optimistic film about the world of micro budget filmmaking. Where Mark Borchardt comes across as something of a tragic figure in AMERICAN MOVIE, Swain and Bernier always seem to be cheerful and upbeat. It probably helps that both of them have fairly solid jobs as scientists, but their passion for filmmaking is no less sincere than Borchardt's.

Well, at least Troy's passion is on a par with Borchardt's. He wants to step up the quality of the films he and Eric make with an eye to making the movies his real job. Eric, on the other hand, seems content to do this as a hobby. Still, for a hobbyist Eric gets pretty ambitious with his special effects and costuming. He is particularly fond of using a blue screen to which special effects and backgrounds can be digitally added in post production. It's by no means on a level with what a Hollywood film can do with similar technology, but for the kinds of budgets he has to work with it's fairly impressive.

After we meet the filmmakers and get some idea of what they've done so far, the rest of JOURNEY chronicles the production of Troy and Eric's most ambitious production to date, a science fiction film with the working title of PLANET X. We see them step up from a blue screen room to green screen, audition actual actors, and work on tweaking their screenplay, even going so far as to storyboard for the first time. In addition to Eric's beloved green screen, the duo also ventures into the real world for some location shooting, including a problematic shoot in a meat locker. These guys are really trying, and it's hard not to root for them. Whatever you think of their film (we don't see it all, but there's enough here to give you the idea), you have to admire Troy and Eric's determination and attitude.

JOURNEY TO PLANET X serves as a reminder that there are people out there with genuine filmmaking passion trying to make something out of nothing. Their movies may not always be good in a traditional sense, but they are authentic expressions of someone's artistic impulse. As such, these films that strive and fail are far more valuable and entertaining than movies like SHARKNADO, where the money and resources to do better are available, but where the filmmakers cynically chase after cheap laughs by trying to be awful and succeeding.

As forJOURNEY TO PLANET X itself, Kane and Koury have set their sights somewhat higher than "awful". They set out to make a film that celebrates the human desire to pursue a dream, no matter how seemingly foolish, and they've succeeded as well. That things stay so upbeat throughout can't help but make for a slightly less dramatic film than AMERICAN MOVIE, and one wishes some of the tension between Eric and Troy had been explored a little more to maybe give the film a little more heft. On the other hand, someone watching JOURNEY might actually come out of it feeling good and maybe even inspired to pursue a dream of their own, so how can you knock that? 3 out of 4 stars.
Posted by Bob Ignizio at 12:00 AM