Il Futuro (January 4th and 5th at the Cleveland Cinematheque) 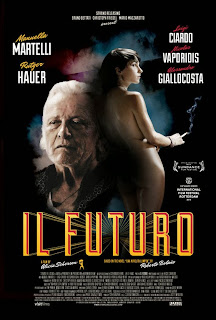 Two damaged souls find a connection but have difficulty maintaining it in the atypical romance IL FUTURO. The film is told in flashback, a device that, like many aspects of the film, never quite pays off. Our narrator Bianca (Manuela Martelli) begins by recounting the death or her parents in a car crash, forcing her not only to take care of herself, but her younger brother Tomas (Luigi Ciardo) as well. This tragedy has a profound effect on Bianca, and as a result the night seems just as brightly lit as the day to her, with other subtle changes to the world (the color of the car her parents died in going from yellow to grey) seemingly taking place as well. It makes for interesting symbolism, but given how quickly the idea gets dropped, it feels somewhat arbitrary.

Although there is some pension money from their father, money is tight for the siblings and Bianca takes a job at a salon to help make ends meet. Tomas also takes an unpaid job at a local gym, more interested in working out than making money. It's while at the gym that Tomas makes two new friends, Libio (Nicolas Vaporidis) and Boloñes (Alessandro Giallocosta).

The film finds its footing once Tomas' gym rat friends move in with the siblings and suggest a way to make some quick cash. They convince Bianca to have sex with a washed up American film star known as “Maciste” (Rutger Hauer) after the role he often played in Italian “sword and sandal” films. The two assure Bianca the actor has a safe full of money in his home, and all she has to do is win his confidence to learn its location.

Although Bianca knows upfront that she will have to have sex with the actor, what she doesn't know until she meets him is that he is blind, and she is noticeably taken aback by this. Nonetheless she goes through with her part, returning often to spend time with Maciste and slowly forming a genuine bond with the man. She even starts seeking out some of his old movies to watch on video. Meanwhile, though, her partners are getting anxious.

How it all plays out you'll have to see for yourself. Suffice it to say, though, that this isn't your typical crime film with your typical neo-noir climax. Not even close. That said, the way the film does end is yet another case of IL FUTURO not fully paying off. Yes, Bianca goes through a metamorphosis in the way she sees the world and her future in it, but there's still an awful lot left dangling unresolved. The film just kind of stops at a certain point, leaving those who have been emotionally invested in the story feeling somewhat unsatisfied.

On the plus side, IL FUTURO looks good, and director Alicia Scherson shows considerable style and skill. The story may have its faults, but the relationship at its heart between Bianca and Maciste is compellingly realized, and Hauer and Martelli give excellent performances. I also appreciated that the film shows a genuine knowledge of and appreciation for the sword and sandal genre it references. When it was done I kind of wanted to put on an old Hercules flick (which is what most Maciste movies were sold as in the U.S.).  But for all its merits IL FUTURO remains a frustrating experience. Perhaps the fault lies in the source material, Roberto Bolaño's novel Una novelita lumpen, or maybe something got lost in Scherson's adaptation of the material. There's still a good bit here of interest, but it's a tough one to truly recommend.  2 ½ out of 4 stars.
Posted by Bob Ignizio at 12:00 AM