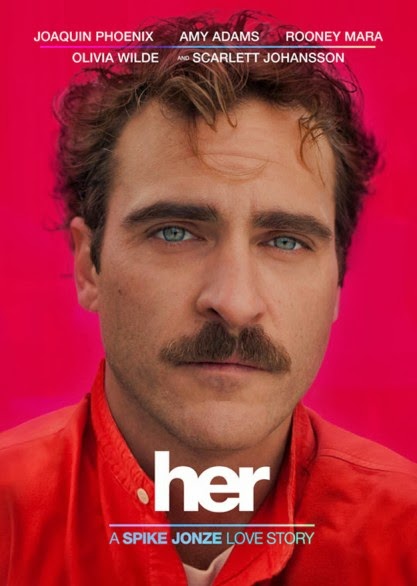 “Love” is the word you most often hear when people talk about their iPhones. The clever devices are the first thing they reach for in the morning and the last thing they touch at night. Asked in a recent survey how they felt when they misplaced their phones, more than 70 percent of users said “panicked,” 14 percent said “desperate,” and a truly addicted 7 percent said “sick.”

Do they “love” their phones in the same way they love their families? Maybe so. The phones are always there for them. They provide validation that they are loved, noticed and wanted, that they exist.

Humankind's love affair with smart technology is one of the themes of HER, a science fiction romance written written and directed by Spike Jones (nee Adam Spiegel). It the first solo screenplay for Jonze, following his highly original collaborations with screenwriter Charlie Kaufman (BEING JOHN MALKOVICH, ADAPTATION) and his 2009 adaptation, with Dave Eggers, of Maurice Sendak's WHERE THE WILD THINGS ARE. Jonze is also producer of the Jackass TV series and movies, which gives you some idea of his range.

The story plugs into a familiar theme. A lonely man, unable to properly connect with real women, creates his ideal mate by artificial means. The story has been expressed in vehicles as wide-ranging as Pygmalion, S1M0NE, LARS AND THE REAL GIRL, and even an episode of TV's The Big Bang Theory in which perpetually dateless physicist Raj believes Siri, the iPhone personal assistant, is his new girlfriend.

Our hero, who has the toothsome name Theodore Twombley, is played by Joaquin Phoenix, wearing a '70s-style mustache, (or “porn 'stache”), curly hair and round Oxford glasses. The film is set in the near future in L.A., where Theodore, a writer, is employed by a service that provides flowery, heartfelt “personal” letters for clients. Theodore is one of the company's best wordsmiths, adept at pouring out sincere-sounding prose that clients love. Technology has evolved to where handwritten letters can be produced by reciting into a computer, but human intimacy has so deteriorated that personal expression is outsourced companies like Theodore's employer, BeautifulHandwrittenLetters.com.

One day a new operating system, called OS1, enters Theodore's life. Billed as “ the first artificially intelligent operating system,” the new OS is said to have actual consciousness. Having selected a “female” OS, Theodore is greeted by a warm woman's voice (Scarlett Johansson, a late replacement for Samantha Morton). The operating system names herself Samantha, and a relationship is born.

Samantha becomes Theodore's constant companion, at his computer and in his shirt pocket via a portable device. She's intuitive and super-efficient, organizing Theodore's computer files in an instant, reminding him of appointments, and even sending his best work samples to a publisher — one that still publishes books.. Samantha is charming, curious and creative, drawing amusing pictures and composing contemplative piano music to express her feelings. What's not to love?

Samantha is like a newborn soul, discovering and experiencing the world. “I want to learn everything about everything!” she tells Theodore, who is rejuvenated by her enthusiasm for life. Their intimacy grows, and they have shattering cyber-sex.

Samantha has everything Theodore could want in a woman, except a body. Being a consciousness without a physical body troubles Samantha, who at one point asks him, “What's it like to be alive in that room right now?” Restless, Samantha wants to be more than a robot. She wants physical intimacy with Theodore and, in one of the movie's more unusual scenes, enlists a hapless surrogate to have sex with Theodore. (It's no spoiler to say it does not go well.)

Theodore takes Samantha, via his portable device, on a double date with his affable boss (Chris Pratt), and nobody thinks it odd. Real women, however, continue to confound Theodore. A blind date (with Olivia Wilde) goes terribly awry, partly because of his growing attachment to Samantha.

Jonze explores in HER the kinds of metaphysical questions familiar from his collaborations with Kaufman. Because Samantha is not tethered to time and space, her “consciousness” expands in seemingly unlimited ways. She begins to connect in ways Theodore can't understand to other beings, human and artificial — including, in a piquant non sequitur, a cyber version of philosopher Alan Watts.

The story provokes interesting questions. Are we a mind or a body? What is the nature of consciousness? How are people, and society, affected by an increasing dependency on technology? But its appeal is more to the mind than the heart. The idea of a man in love with a voice lends itself better to comedy than tragedy, as Jonze would have it in this solemn film, with its sweetly poignant Arcade Fire music. It's a lot to ask of your audience to shed a tear over a computer voice, no matter how alluringly raspy or recognizable as the shapely Scarlett Johannson. Matters aren't helped by an abundance of dialogue that tries to be profound but isn't. “Falling in love is a form of socially acceptable insanity.” “The past is just a story we tell ourselves.”

In a triumph of style over content, the film looks great, thanks to Hoyte Van Hoytema's striking cinematography, K.K. Barrett's cool production design and some strikingly original conceptions of future technology. It's an ambitious production that has already been hailed as deeply significant by many critics. People who crave a more human touch, or can't buy a man-chatbot romance, may find it as cold as its futuristic L.A cityscape. 2 out of 4 stars.
Posted by Pamela Zoslov at 12:01 AM