Fateful Findings (January 18th at midnight at the Capitol Theatre) 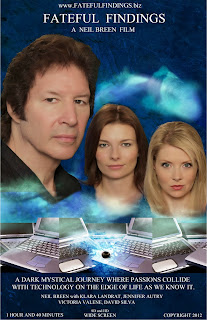 If you're looking for a film that delivers the same kind of deadpan, head scratching, expectation squashing awfulness as Tommy Wiseau's cult sensation THE ROOM, look no further than Neil Breen's FATEFUL FINDINGS. Billed as a “paranormal thriller”, the film begins with young Dylan and Leah finding a mushroom that turns into a jewelry box. The kids put the box back, but not before Dylan takes a black stone out of it. Soon after, Leah moves away and we flash forward a few decades to the present, just in time to see Dylan (now played by writer/director/editor/production designer Neil Breen) get hit by a car resulting in severe injuries.

Apparently the black stone heals Dylan, who just walks out of the hospital and goes home to his wife Emily (Klara Landrat) more or less as if nothing big has happened. Dylan is a writer supposedly working on his second book, but as we soon learn he's involved in something much bigger. But why spend time on that when we can explore the painfully dull domestic lives of Dylan and Emily, as well as their bickering neighbors Jim (David Silva) and Amy (Victoria Valene)?

For the most part, very little happens in the movie. Whenever something really major does happen (like, say, a murder or suicide, or a murder someone tries to make look like a suicide), the characters behave no differently, and it's a toss up whether or not there will be any payoff story-wise. Eventually, two of the numerous plot strands begin to emerge as important: Dylan reuniting with Leah (now played by Jennifer Autry), and his Edward Snowden-like whistle blowing hacktivism, which leads him to discover secrets so damning about the government and big business that the whole system could come tumbling down. Which, even in a bad movie, you would think might make for some excitement. But Breen, ever the cinematic rebel, refuses to take the predictable route.


Everyone's performance is so wooden that emotion has to be conveyed either through exaggerated expressions (Landrat is especially adept at this), or through bits of physical business. The latter is generally reserved for anger, and almost always involves throwing something. Drinks are thrown. Books are thrown. Laptops are thrown. Books are thrown at laptops. You get the idea. We also get scenes of Breen and one of his actresses (we never see her face, but I'm assuming it's Autry) curled up nude in a room covered with black garbage bags. Exactly what these scenes are supposed to be or mean is anyone's guess, but they pop up enough one can only assume they mean something to Breen.

Is this “the worst movie ever made”? Probably not. There are any number of microbudget films out there, some self aware enough to use their badness as a selling point, others clearly made by cluelessly inept filmmakers confident of their own genius, with plenty that fall somewhere in between. And honestly, no one really wants to see the worst movie ever made. What they're looking for in films like this and THE ROOM are bad films that were made with passion and sincerity, and because of that still manage to entertain on some level, even if by traditional Hollywood standards of filmmaking they're failures.

I found FATEFUL FINDINGS just a little too deadpan and lacking in action for my tastes; I prefer my schlock fast-paced and over the top. Still, the film was not without interest for me, and for the crowd that made THE ROOM a cult hit, FINDINGS should work considerably better. Quantifying a film like this into a star rating seems even more ludicrous than usual, but if I must give a number, I'd say 1 out of 4 stars. But I mean that in the best possible way.

By the way, outside of a few festival showings, this screening at the Capitol Theatre is the premiere showing of FATEFUL FINDINGS. Who says nothing cool ever happens in Cleveland?
Posted by Bob Ignizio at 12:49 AM