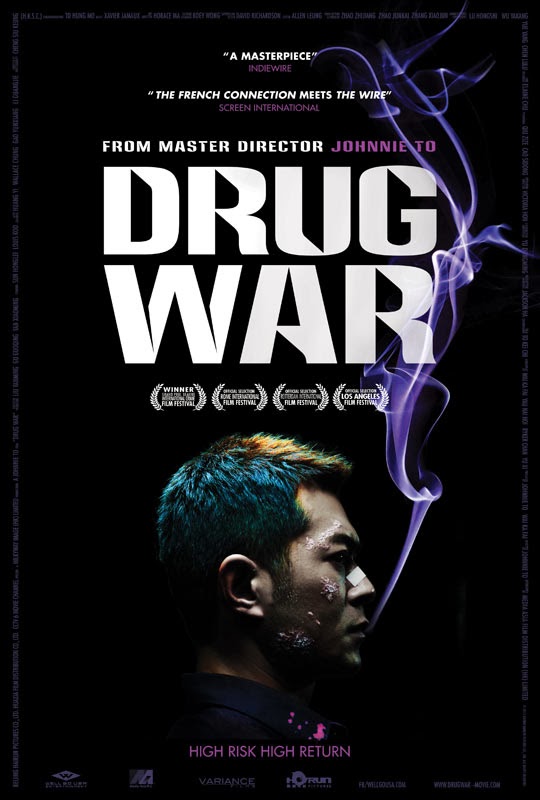 With DRUG WAR, director Johnnie To has made yet another solid crime thriller populated by intriguing characters and delivered with enough of a spin on formula to impress even jaded genre fans. The level of action and violence is more subdued that usual here, but that's more than compensated for by a twisty plot in which intrigue and subterfuge abound.

The plot revolves around two characters on opposite sides of the law. Captain Zhang (Sun Honglei) heads up the police force trying to take down a meth ring. Choi (Louis Koo) is a member of that ring who winds up in police custody after crashing his car due to injuries sustained when his meth lab exploded. Knowing that he'll get the death penalty for the amount of drugs he produced, Choi offers to help take down the rest of the ring in return for his life.

As Zhang and his team embark on a complicated operation intended to bring down the entire criminal organization, Choi seems to be sincerely helpful. Nonetheless, Zhang remains suspicious of the turncoat criminal, even after he saves his life. The audience isn't sure, either. Koo plays his character with absolute cool, and it's hard not to want to like him. Still, something tells us we shouldn't entirely trust the guy.

Although DRUG WAR is undeniably nice looking, To puts solid filmmaking mechanics and storytelling ahead of style. His timing is impeccable, and though he is best known in the U.S. for his crime and action films, scenes like the one in which two sets of characters in a hotel have to be prevented from seeing each other makes one curious to see some of his comedies. As mentioned earlier, there isn't much violence in the film; this war is mainly one of wits. When the guns finally do come out for the climax, no one on either side of the law escapes unscathed.


DRUG WAR is To's first film made in mainland China (he's from Hong Kong, and normally works there). As such, his freedoms were undoubtedly curtailed somewhat more than usual. It's hard to say if he means his film to be a critique of Chinese drug policy, but at the very least he shows that the drug war exacts a heavy price on cops and criminals alike. First and foremost, though, the film is a fine piece of entertainment, and much as I hate to give Hollywood any ideas, it's easy to see this one getting an American remake. 3 ½ out of 4 stars.
Posted by Bob Ignizio at 12:00 AM