We are in the midst of the 2013 awards season - you know, when Hollywood celebrities and filmmaker types get honored for their, er, achievements and the entertainment industry pretends that the intangible nothingness they do actually somehow matters. A few weeks ago there were the Golden Globes (when did that ever merit attention?), then we've had the TV Critics Awards, the SAG Awards, and I little know nor care what, in the runup to the biggies - the Academy Awards. And the MTV Movie Awards.

As we know, one of the sadder moments of the Golden Globes was onetime sex goddess Jacqueline Bisset seemingly stunned and out of it as she accepted her trophy. Let's be kind and just assume she's been a permanent state of stupefaction ever since the entertainment industry hired her for the latest gig. I mean, she's over 50, right? Hollywood mentalities don't even seem aware actresses live to be that old. Well, the Gloria Stuart one in TITANIC did, but she was probably a James Cameron CGI trick, like so much else. 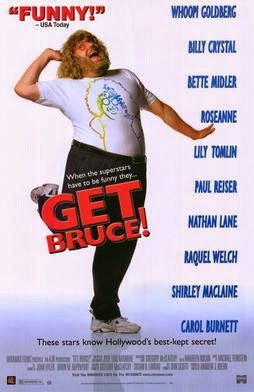 But Bisset's maladroit, unprepared performance in front of the podium and cameras brought to mind a general theory I have about performing artists. Let me put it like this...Never get into any sort of jeopardy situation in which you need one to dial 9-1-1 to rescue you. Because without scriptwriters, these showbiz folk couldn't put two words together.

My key piece of evidence: GET BRUCE, a 1999 documentary that represented a lone solo effort from late filmmaker Andrew J. Kuehn, a guy whose career mainstay was cutting trailers. If you ever wondered what a picture made by a specialist in trailers would look like, no it's not a Michael Bay actioner that has no breathing space, but an okay inside-Hollywood portrait of a guy who is so inside you probably haven't heard of him.

It's Bruce Vilanch, a big, teddy-bearish gay guy who looks like a cross between Michael Moore and a cocker spaniel - although Donnie Osmond famously described him as a Muppet. Vilanch went from a Chicago Tribune entertainment columnist to writing jokes for public appearances and stand-ups. This soon brought him, according to the feature, a permanent on-call slot as moviedom's upper-echelon gagwriter, sought by everyone from career comics (Whoopi Goldberg) to dramatic thespians (Sigourney Weaver) when they must punch up their recitations and display sparkling verbal wit at award shows or charity galas. Maybe even on dates, too, though Kuehn's camera doesn't go there.

Yes, the jokes uttered by your favorite movie stars in front of the Academy of Motion Picture Arts and Sciences may not have been their own words at all but tailor-made bon mots commissioned from Bruce Vilanch.

No, not Jacqueline Bisset. Or WALL-E. That might change by the next award show, though. Just remember: show business = phony. And we’ll all get through this awards season more or less unharmed.

For all I can tell, Bruce Vilanch wrote the lines for the old homophobic guy to say on Duck Dynasty. We all know reality TV is scripted too, after all.