Camille Claudel, 1915 (January 9th and 10th at the Cleveland Cinematheque) 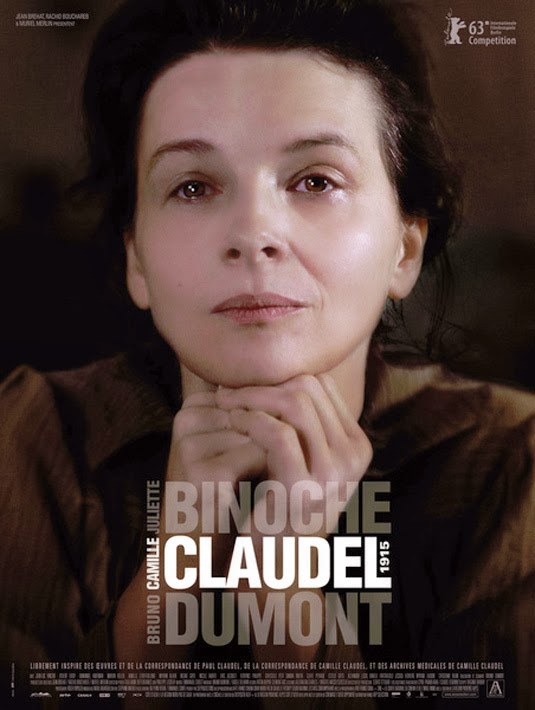 Even if you’ve never seen--or wanted to see--a film by French auteur Bruno Dumont, CAMILLE CLAUDEL 1915 is worth seeking out for its fearless lead performance by Juliette Binoche alone. Dumont has been racking up festival prizes (including two Cannes Grand Jury wins for HUMANITE and FLANDERS) and international critical plaudits for nearly two decades without making a dent in the U.S. market. His one foray onto American shores--2003’s California-lensed TWENTYNINE PALMS--is best forgotten.

Maybe it’s because Dumont’s films seem too intimidating with their deliberate pacing and tendency to reduce the human species to the level of barnyard animals, especially while fucking. Or perhaps it’s just because most domestic arthouse habitues don’t like being challenged. (Hard to believe that equally “difficult” foreign-language directors like Alain Resnais and Ingmar Bergman were once furious topics of conversation--and debate--at tony American cocktail parties.) As a result, they’ve missed out on one of the most distinctive voices in contemporary world cinema.

Binoche’s extraordinarily impassioned turn as artist and former Auguste Rodin muse/lover Camille Claudel might have been the entire show in a lesser movie. Claudel, who spent a good chunk of her latter years in a church-run mental asylum, was a victim of both the family who committed her and the times in which she lived. But Dumont doesn’t let anyone off easy, not even Claudel. She was probably a paranoid schizophrenic, something Dumont and Binoche don’t shy away from depicting. Nor does he use the occasion for feminist hand-wringing to win points with politically correct tastemakers.

Dumont’s austere approach to filmmaking using mostly non-professional actors (the cast includes real asylum patients and caretakers), de-emphasizing plot and favoring a stripped-down approach to mise-en-scene deserves to be spoken of in the same breath as (Robert) Bresson. The transcendence he occasionally achieves (see 2009’s exquisite HADEWIJCH) rivals that of Danish master (Carl) Dreyer.
A speech late in the movie by Claudel’s brother, Paul (Jean-Luc Vincent), in which he describes his life-altering discovery of Christianity and, alternately, how reading Arthur Rimbaud “cracked open the walls of his materialistic prison,” neatly encapsulates the opposing dialectics of all Dumont films in which the sacred is in constant battle with the profane. (It’s been a recurring Dumont motif since his striking 1997 debut, THE LIFE OF JESUS.)

Claudel was the subject of an earlier movie, the far more conventional and romanticized 1988 biopic CAMILLE CLAUDEL starring Isabelle Adjani as Camille and Gerard Depardieu as Rodin. At two-and-a-half hours, it was the cinematic equivalent of a glossy coffee table book. Yet it’s Dumont’s cri de coeur that history will remember. And the only version that truly matters. 4 out of 4 stars.
Posted by Milan Paurich at 12:00 AM