Book review: Showdown at Shinagawa: Tales of Filming From Bombay to Brazil 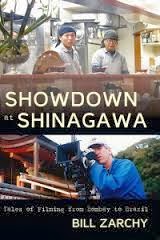 Now, when you think cinematographer, what do you imagine? The classic James Wong Howe lighting up the faces of beauties in B&W in the 1930s and 40s? Roger Deakins making the magic for Spielberg? Chris Doyle becoming a legend in his own time working with rising Hong Kong talent in the 1990s? Robert Banks Jr., shooting expired celluloid stock on a shoestring budget for a diversity of Cleveland filmmakers? Whoever that veteran lensman was who hit it off with delicious Leslie Ann Warren on the set of the TV miniseries North and South and got to marry the vixenish actress? Yes, I forget the latter's name, but "lucky bastard" will do.

What film schools won't tell students, however (besides that at the level of tuition those bastards charge, you better get a Leslie Ann Warren-quality fringe benefit) is that a lot of pro cinematographers just take industrial and commercial gigs most of the time. Nothing to be ashamed of, and sometimes quite interesting and creative gigs, but not Hollywood stuff.

Bill Zarchy, an Emmy-winning San Francisco-based cinematographer with a sideline as a writer, has just published a collection of his articles, some previously run in the venerable American Cinematographer mag, others from various blogs and travel publications. His memoir Showdown at Shinagawa makes clear that while he's been mainly on the fringes of mainstream Hollywood (though one of his clients was Morgan Freeman), being a director of photography has certainly granted him a peripatetic life.

At the behest of major firms and corporations, he filmed in the Far East (a regular destination, it seems, where Zarchy's formidable height makes him stand out), Africa, India, South America, Cannes, at the White House and across the USA. He's met President Bill Clinton and they both bonded over mourning for deceased pet dogs (Zarchy does sound like a lifelong Democrat - never underestimate Clinton). He worked on Apple Store promo movies for the late Steve Jobs, and it does rather sound like the venerated innovator wanted to direct the whole thing himself - why are we not surprised?

There are a few shoutouts to favorite makes of digital cameras (sorry, I know Robert Banks prefers real film), but the vast majority of the prose is non-technical. Only later in the book does Zarchy's writing get to his early years and starts in the business. The longest chapter, the next-to-last one, concerns an early-90s assignment in the Philippines, scouting locales for what the photog thought would be his mainstream-directorial debut, helming "Emerald Night," a low-budget Japanese sci-fi actioner (starring a Netherlands MMA fighter and a Canadian supermodel) in a BLADE RUNNER vein.

Viewers of direct-to-video B-movies might recognize some names here, whilst any vets of a movie set or business plan might well feel that ominous, sinking sensation, as Zarchy realizes that the money isn't coming in, and despite all the wonderful locations he's uncovered and the imagery in his mind, the project is dying on the vine. I've seen the same happen in Cleveland (often to similar-sounding projects).

Even so, he writes that the friendships made during the misfire were good ones, and so it wasn't a waste after all. That (and the experience of travel) is a common theme running through Showdown at Shinagawa despite the diverse origins of the material, the camaraderie he has found on movie sets. Be it with his regular collaborators or just one-time-only encounters during semi-comical attempts to set up, break down, and get footage they need inside a Chinese skyscraper during off-hours, he has found the moving image to be a pretty darned good universal language.

His book is a pretty darned good one as well, though I might add it's as much for a general readership as it is for movie geeks - maybe even more so. And if it serves as a gateway drug for some of you to subscribe to American Cinematographer, that's a fringe benefit too. Not a Leslie Ann Warren, perhaps, but it will do.
Posted by Charles Cassady Jr. at 12:00 AM