[BLUE IS THE WARMEST COLOR screens Friday January 10th at 9:00 pm and Sunday January 12th at 7:15 pm at the Cleveland Cinematheque.] 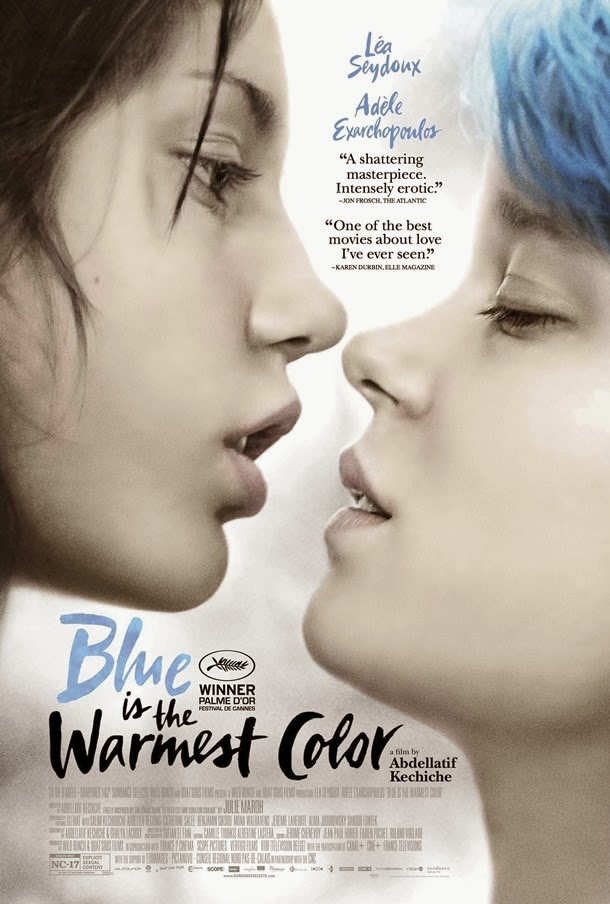 Based on the graphic novel by Julie Maroh, BLUE IS THE WARMEST COLOR is yet another film like AMERICAN SPLENDOR, GHOST WORLD, and PERSEPOLIS that shows that not all comic book movies are about guys in costumes punching things. Specifically, BLUE is a nearly three hour long romantic drama that tells the story of how high school student Adele (Adèle Exarchopoulos) discovers her sexuality by falling in love with the slightly older blue haired Emma (Léa Seydoux).

Writer/director Abdellatif Kechiche tells this story in a subdued, matter of fact manner, and the ups and downs of the characters' relationship feel authentic and universal enough that anyone should be able to relate, regardless of gender or sexual orientation. Much credit also goes to the two leads, who give utterly believable performances even when the film puts them in the incredibly vulnerable position of performing lengthy and explicit sex scenes. Not surprisingly, it's the sex scenes that have gotten much of the media attention. It seems no matter how ubiquitous actual (and generally banal) pornography is in modern society; any time a “legitimate” film tries to deal with sex in a frank and mature manner, some people lost their shit.

So is BLUE IS THE WARMEST COLOR pornography? I guess that depends on your definition. I would say it's more along the lines of seventies softcore smut of the sort I used to stay up late to watch on Showtime when I was a teenager. I do at least understand why author Maroh might be upset by this material. I disagree with her assessment of the sex scenes as porn, but I would agree that they don't play like authentic lesbian sex. They're much more like, well, the softcore gropings I mentioned earlier. I don't personally have any moral objection to that sort of thing, but it does tend to undermine the seriousness of the rest of the film.

I also imagine that Maroh couldn't have been thrilled with the way that the film drastically changes the ending of her novel, but of course that is the peril of adaptation. And let's be honest here. There is no reason for this movie to be almost three hours long, or to have one of its Skinemax sex scenes go on for ten whole minutes. Tighter editing would have done wonders. That said, although its flaws can't be ignored, BLUE IS THE WARMEST COLOR is still very much worth watching for what it gets right. 3 out of 4 stars.