Bastards (January 25th and 26th at the Cleveland Cinematheque) 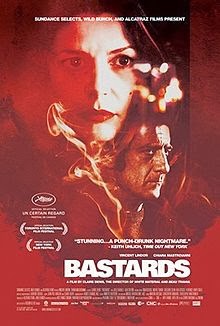 Claire Denis’ films have always been a contest between the feral and the lyrical. In BASTARDS, her latest cause celebre, the feral side definitely wins out. A pulpy family melodrama whose convoluted plot machinations wouldn’t be out of place in a night time soap (are there still night time soaps?), the movie reduces human beings to their basest instincts. Sex, murder, business chicanery, dysfunctional families behaving badly, Denis serves them up with a straight face and barely contained glee.

Still, if you’re somehow able to strip away the exploitation film veneer, you’re left with another supremely aestheticized Denis examination of hubris in all its various forms. Apparently that wasn’t easy for some critics who greeted BASTARDS with scorn at its Cannes premiere last May. (Denis’ cannibals-in-Paris tone poem, TROUBLE EVERY DAY, received a similarly muted response in most quarters a decade earlier.)

The two families at the center of the movie pretty much define systemic rot. Sea captain Marco (Vincent Lindon) returns to Paris to help his recently widowed sister (Julie Bataille) with her failing shoe business and problem child daughter (Lola Creton). He rents an apartment in the same building as an attractive single mother (Chiara Mastroianni) who’s the mistress of a wealthy business mogul (Michel Subor) with some mysterious connection to Marco’s late brother-in-law and self-destructive niece. There’s also a scruffy-looking pimp (Denis regular Gregoire Colin) who operates a kinky sex show out of a farmhouse (?) on the outskirts of town.

None of the characters are particularly admirable or even trustworthy. At times, ostensible protagonist Marco seems to have a hidden agenda. We’re never entirely certain whether he’s a knight in shining armor dashing in to rescue his sister and niece, or somehow implicated in the depravity and corruption surrounding him.

Not that Denis makes figuring out any of these connections (familial and otherwise) easy. As usual, she prefers an indirect, teasingly enigmatic/elusive approach to narrative:  the type of thing that drives literal-minded critics batty. Yet watching Denis’ films build a head of toxiferous steam--and always at their own measured pace--remains one of the great joys of contemporary cinema. You just have to readjust your movie-watching antennae.

Denis’ films have always felt supremely tactile. The dense fabric of a winter coat, a tuft of hair blowing in the wind, a buffed parquet floor: they’re all fair game for a raging, wide-ranging sensualist like Denis. (The great Agnes Godard remains her non pareil director of photography.)

A lot of terrible things happen in BASTARDS, and it’s definitely not for the faint of heart.
But Denis remains a force of auteurist nature whose artistry is unimpeachable. 4 out of 4 stars.