[AMERICAN PROMISE screens Friday January 3rd at 6:30 pm and Sunday January 5th at 1:30 pm at the Cleveland Museum of Art.]

*Note: a computer crash at Cleveland Movie Blog central has taken up much of my time of late, which is why this review is slightly late and a little shorter than I would have liked it to be.* 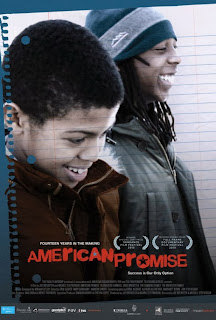 It's kind of cheap and easy to describe AMERICAN PROMISE as HOOP DREAMS for education, but it's also reasonably accurate. As in HOOP DREAMS, this documentary follows two African American kids for an extended period of time. Only instead of the focus being on sports, it's on academics. We first meet friends Idris and Seun when they are 5 years old. Their parents, wanting the best for their sons, enroll them in the prestigious Dalton school, a private institution with an excellent performance record, but only a small number of minority students.

Both boys have difficulties at the school. In some cases, race is a factor, but there are other issues as well. For instance, both boys have learning disabilities that, had they been diagnosed sooner, might have made a difference in their performance at school. And although the film never directly addresses it, having a camera follow you around for 13 years can't help but have some effect on your behavior.

Seun's problems at Dalton eventually cause him to leave prior to high school and transfer to a public school. It may be a public school, but Banneker seems very progressive. It also has a curriculum designed around its mostly black, Hispanic, and Asian student body. Although certainly unintended and unexpected when filming began, this turn of events allows AMERICAN PROMISE to contrast two different approaches to education. Interestingly, neither one really emerges the victor as both students experience ups and downs on their path towards high school graduation. Some problems are inherent in each of the schools, but others would surely have been just as difficult to deal with no matter who one is or where one is going to school.

Nonetheless, AMERICAN PROMISE does make a case that race still plays a role in the quality of education a young man can hope to get. Gender as well, as girls of color statistically do about as well as their white peers. It raises more questions than it answers, but it does at least do a fair job of identifying where some of the biggest problems are.

AMERICAN PROMISE does all that while at the same time telling a story as emotional and engrossing as any Hollywood drama. Again, like HOOP DREAMS, things happen through the course of this film that are incredibly dramatic, and perhaps all the more so for the fact that they were not, and could not have been planned. In 13 years, there's plenty of time for all kinds of triumph and tragedy, hope and despair, and AMERICAN PROMISE captures it and distills it into a tight narrative that, at almost 2 1/2 hours, never feels long or slow moving. 4 out of 4 stars.