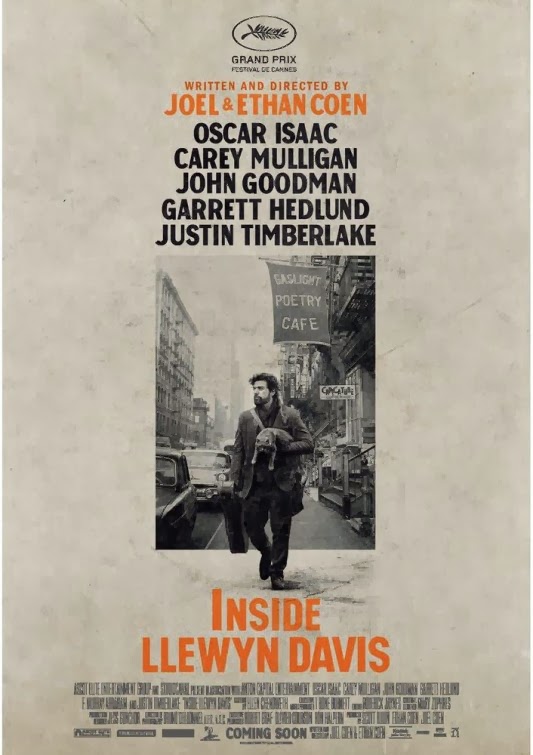 I’m going to remember 2013 as year I kept watching movies. Maybe I didn’t see as many as I had in past years. And maybe the ones I did watch weren’t quite as good. Some I watched for fun, some I watch out of a pathetic, half-snobby sense of cultural obligation, and some I watched because Ignizio asked nicely. Another one of them I watched because it had aliens in it. That one was DARK SKIES. It was terrible.

And still I kept watching movies...

2013: The Year I Had Cable, Netflix, Amazon Prime, Hulu, HBO GO, And The Internet, And Somehow Still Didn't Manage To See SHARKNADO.

INSIDE LLEWYN DAVIS may not be the best movie I saw this year, but who wants to muddle through the assignation of dubious objective superlatives when one can simply sit, gape, and have their heart slowly broken across 105 minutes. I left with the echo of a song trailing through my head, and a stupefied grin smeared across my face. The Coens have done it again.

I’ve seen UPSTREAM COLOR on as many “Worst of 2013” lists as I have “Best of…” For me it's exuberantly the latter. As someone who has always felt that Shane Carruth’s prior film PRIMER was just a bit too smart in a smugly oblique sorta way, this COLOR's engrossing narrative and naked, emotional core were as welcome as they were wholly and gleefully surprising.  Harrowing and mesmerizing, never has eco-horror-infused sci-fi ever looked or felt this Terrence Malick-y.

It never fails. Every time I gear up to watch one of  Richard Linklater’s BEFORE films, I hem and haw. Part of me just can’t get psyched at the notion of two self-important white folks jabbering love, life and pop philosophy for two hours. But after tugging my too-tiny expectations around me like an ill-fitting ironic t-shirt, I press play, succumb, and invariably walk away charmed. BEFORE MIDNIGHT. Just… Wow.
ROOM 237. It’s like my love of THE SHINING and my BA in English got stranded together in a remote Colorado resort hotel. But instead of making gruesome ax murders, they made babies. Then someone interviewed the babies. And the babies had a lot on their minds.

THE WOLF OF WALL STREET. I already reviewed this one for the site, so all I’ll say is: so much better than DARK SKIES.

SPRING BREAKERS. For as much as some folks have disparaged this gaudy li’l nugget of bass-thumping, rump-shaking trash, there’s a beauty, rhythm and wicked sense of humor behind all the perceived stupidity. Some of Harmony Korine’s most inspired work.

THE EAST. Languid, indie B.S. self-consciously married to a taught corporate espionage thriller. A perfect example of a movie made all the more intriguing by its flaws.

JOHN DIES AT THE END. PHANTASM auteur Don Coscarelli delivers more wild horror japes. Striking somewhere between the tightly-structured, cult-ready dryness of BUBBA HO-TEP and the passionate reckless abandon of PHANTASM, JOHN is not one of the filmmaker’s better efforts… but I enjoyed it just the same.

MUCH ADO ABOUT NOTHING. Joss Whedon’s itsy-bitsy, black-and-white indie filmed over ten days at the director’s own house. All your favorite stars from the Whedonverse (minus Emma Caulfield) soar through one of Shakespeare’s most ubiquitous comedies. Delightful and hilarious.

This one’s a tie between STAR TREK INTO DARKNESS and MAN OF STEEL. Tiresome, self-congratulating retread  vs. tiring, bloated reinvention. Two films enter. Everyone leaves. Early. They leave early. Because they walked out. Because both movies sucked so bad. Eh? Get it?
Nevermind.

ENDER’S GAME. Really thought they’d totally eff this one into an unrecognizability. Really happy they didn’t.

EQUINOX (1970). Because it’s a sheer work of joy and the closest we’ll ever get to the perfect (albeit unintended) prequel to THE EVIL DEAD.

THE PRIVATE LIFE OF SHERLOCK HOLMES (1970) – Had Billy Wilder been permitted to release his intended three-hour anthology-style Sherlock Holmes comedy, I have no doubt in my mind it would remain the definitive cinematic adaptation of Doyle’s eccentric sleuth. In its abbreviated two-hour, two-part form, it’s merely among the most definitive. Come for some of the best Watson/Holmes interplay ever captured on film… stay for Nessie.

FORBIDDEN WORLD (1982) – Originally released as MUTANT, this is Roger Corman’s ALIEN knockoff. I cannot express how much I enjoyed this movie.

THE WHISPERER IN DARKNESS (2011) – Adapted by the H.P. Lovecraft Historical Society from one of the few unfilmed stories in the Cthulhu mythos, this faux ‘50s black-and-white masterpiece manages a thrilling, near-perfect re-telling of one of Lovecraft’s creepiest stories. What it lacks in eldritch dread, it more than makes up for in Shoggoth mayhem.

ANTIVIRAL (2012)  - David Cronenberg’s son, Brandon, takes on his father’s body-horror mantle. And it’s a doozy. Prescient, funny, and totally gross in all the right ways.

“i watched this movie in the dark on a tuesday with the lights off and the surround sound on and my heart was in my ass for much of this flick. if you gotta date and u want ur lady tucked against you ass to ass this ones for you.”

Because that’s exactly what I want for 2014. Myself and a lady friend… on the couch… on our hands and knees… facing away from each other… our butts pressed firmly together… both of us screaming.
Posted by Matt Finley at 12:00 AM