White Reindeer (December 12th and 14th at the Cleveland Cinematheque) 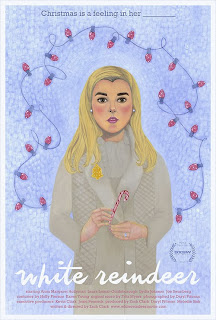 The second film in as many weeks to pivot on a chic suburbanite becoming BFF’s overnight with a stripper – the other was Jill Soloway’s disappointing AFTERNOON DELIGHT – WHITE REINDEER at least has a few unexpected tricks up its sleeve. One of the pleasures of Zach Clark’s micro-budget indie is how it keeps you on your toes. Despite a set-up that’s already become something of a Sundance cliche (professional sex worker helps shake off the cobwebs of a repressed housewife’s dormant sex life), Clark knows that surprise can be a movie’s greatest attribute, and a jaded audience’s best friend.

Suzanne (Anna Margaret Hollyman) is a chipper Virginia real estate agent who, as the film opens, is positively elated at the prospect of moving to Hawaii with TV weatherman husband Jeff (Nathan Williams) after the Christmas holidays. Imagine her horror when she returns home from shopping one night to find Jeff murdered by a burglar.

Since Suzanne’s mantra seems to be “pick yourself up, dust yourself off and start all over again,” she assuages her grief by trolling the browser history on her late husband’s computer. Much to her surprise--or is it really? we can’t really tell by Suzanne’s glazed expression--she discovers he was having an affair with an African-American stripper named Fantasia (Laura Lemar-Goldsborough, very good). Instead of being retroactively pissed at Jeff, Suzanne uses this post-death revelation to take a walk on the wild side. Ingratiating herself to Fantasia, the two form an unlikely friendship that’s as puzzling to them as it is charming to watch. (I didn’t, however, believe that Suzanne would soon be babysitting single mom Fantasia’s toddler.)

Clocking in at barely 80 minutes, WHITE REINDEER doesn’t quite seem fully realized. Subplots (e.g., Suzanne’s strained relationship with her parents and a series of bizarre encounters with some neighborhood swingers) are tantalizingly introduced, but mostly left dangling. Plus, we never really get a handle on why Suzanne and Fantasia would have ever become friends in the first place. And why Fantasia’s stripper pals are so quick to welcome Suzanne into their coke-snorting sisterhood. (Another cliche Clark’s movie shares with Soloway’s:  strippers doing blow before going on stage.)

The presence of Mumblecore icon Joe Swanberg (he plays the male half of the afore-mentioned swinging couple) made me wish that frequent Swanberg collaborator Amy Seimetz had played Suzanne. Newcomer Hollyman is perfectly fine, but Seimetz (UPSTREAM COLOR, A Horrible Way to Die) might have taken the film to an entirely new level. Or at least enabled me to overlook some of its budgetary and creative shortcomings. 2 1/2 out of 4 stars.