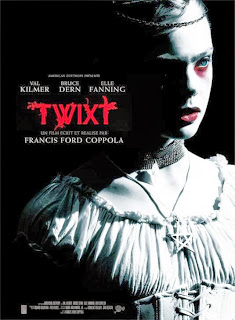 At one time it would have been unthinkable for a new Francis Ford Coppola movie to go straight to video. Nonetheless, that's essentially what happened with his most recent film, the surreal horror tale TWIXT. After a few festival dates and a limited theatrical run, TWIXT showed up unexpectedly on one of the various subscription based instant movie services I use (and I imagine on physical DVD or Blu Ray in what few video stores that remain). What the Hell, it's Coppola. I figured I might as well check it out.

The protagonist of the tale is Hall Baltimore (Val Kilmer), a one-time best selling author of horror novels still grieving the loss of his teenage daughter. If the latest stop on his book signing tour is any indication, his best days as a writer are well behind him; he's been set up at a general store that just happens to stock about a dozen lonely volumes.

The only person in town even remotely interested in the author is Sheriff Bobby LaGrange (Bruce Dern). The lawman fancies himself a writer, as well, and tries to sell Baltimore on the idea of a collaboration. La Grange wants to do something based on his experiences investigating a local serial killer, and to pique Baltimore's interest he takes him to see the latest victim at the morgue. From there, Baltimore gets sucked into the strange history and mysteries of the town as past, present, and dream worlds start to blur.

There's a surreal flavor to TWIXT almost from the start with little odd details such as a clock tower that gives seven different conflicting times, and rumors that a band of gypsy vampires stay nearby. We go into full blown weirdness when Baltimore falls asleep and enters a black and white (with occasional flashes of color) version of the town where he meets V (Elle Fanning), a young girl in white who professes to be a fan. And oh yeah, Edgar Allan Poe (Ben Chaplin) is hanging around in Baltimore's subconscious, too.

At this point in his career, it's not as if Coppola has anything to prove. For his work in the seventies alone, he'll always be regarded as one of the great American filmmakers. Despite a more hit and miss career since, he could still probably get the money to make any movie he wanted to. Apparently what he wanted to make was a small, no doubt personal, gothic horror film that gives little thought to commercial potential, and that's worthy of some respect in my book. There are some interesting ideas and fun performances by Kilmer and Dern, but even as a minor work in its director's oeuvre TWIXT is a too self indulgent and lacks a satisfying enough payoff to recommend to any but the most ardent fans of Coppola or the horror genre. 2 out of 4 stars.