[THE LAST TIME I SAW MACAO screens Thursday December 12th at 8:30 pm and Friday December 13th at 7:30 pm at the Cleveland Cinematheque.] 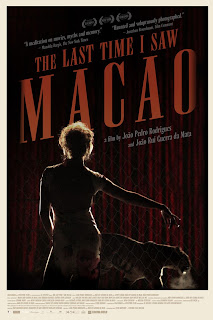 Filmmakers João Pedro Rodrigues and João Rui Guerra da Mata took a trip to the former Portugese colony of Macao, now part of China, and brought their cameras with them. They captured a lot of interesting scenery both natural and man-made, as well as various shots of people going about their day to day business. And I'm guessing they probably did a few simple staged shots of people carrying bird cages, answering phones in hotel rooms, and so on. When they got back home, they edited this footage together, added narration, and turned it into a noirish mystery tale told from the point of view of an at least partly fictionalized version of Guerra da Mata.

The plot that holds this footage together concerns a transvestite named Candy (I believe she is the one we see lip synching and dancing to a Jane Russell number with caged tigers behind her in a pre-title sequence), evidently an old lover of da Mata's. It is at her request, precipitated by the murder of a friend, that he returns to his childhood home of Macao. Most of the film consists of de Mata's attempts to meet up with Candy while he and another narrator (Rodrigues, I'm guessing) either reminisce about the Macao they remember, and how it has changed, or else try to create a plot out of the more or less random shots.

Arthouse aficionados might see similarities to Resnais' LAST YEAR AT MARIENBAD, while fans of less reputable entertainments might feel as if they're watching a collaboration between Doris Wishman and Jess Franco. Which goes to show how thin the line can be dividing exploitation and horror films from respectable arthouse fare; one person's technically incompetent hack is another's visionary, and which one is which is often dependent on the viewer's preconceptions.

One would have a hard time defending Wishman as some sort of lost master of cinema, but her penchant for aiming the camera at people's shoes, pieces of random scenery, or anything other than the person speaking during dialog sequences to cover up the fact that her films were shot without sound and dubbed in post production isn't all that different from what's going on here. And Franco, who truly is one of the great exploitation auteurs, often infuriates those viewers looking for visceral thrills with his seemingly endless travelogue footage and tendency to improvise scenes, or even shoot entire movies on the fly. Much of Franco's work also shares in common with MACAO, and for that matter many of the directors of the French new wave, a love for pulpy crime fiction and Hollywood film noir.

So where do these musings and observations lead with respect to THE LAST TIME I SAW MACAO? The film as enjoyable as a sensory experience and an example of how to turn nothing into something, but at the same time it's also kind of frustrating when every time something dramatic happens, it does so offscreen. While ultimately satisfying, it's no EROTIKILL or TWO UNDERCOVER ANGELS, and it's certainly no LAST YEAR AT MARIENBAD. Then again, what is. 2 1/2 out of 4 stars.
Posted by Bob Ignizio at 12:00 AM