The Hot Flashes (now on video) 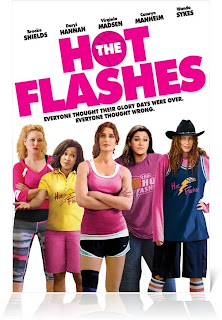 Exploitation filmmaker Herschel Gordon Lewis began his career by asking himself a simple question: “What kind of motion picture might there be that the major companies either could not make or would not make?” At the time, which was the 1960s, the answer was to make films that played up nudity and gore. These days, with Hollywood largely having taken over the horror business from the independents, and hardcore pornography having replaced the far more innocent “nudie cuties” of Lewis' time, the answer to that question would be very different. One possibility: movies starring and about middle aged women that deal with their issues. Hollywood sure isn't making many of those.

Susan Seidelman (DESPERATELY SEEKING SUSAN, Sex and the City) helps fill that void with her latest film THE HOT FLASHES which, despite a cast of well known female stars and Seidelman's own track record, is being distributed by small independent company Vertical Entertainment. The film had a very limited theatrical run, but most who discover it will likely do so on DVD/Blu Ray or through streaming services like Netflix (which is where I came across it).

THE HOT FLASHES stars Brooke Shields as Beth, a former star player for her small Texas town's high school basketball team turned dissatisfied housewife/mom. Beth learns that a mobile breast cancer screening truck started by her deceased friend Tess (also a former high school basketball player) is about to lose its funding. To save the truck, Beth comes up with an unusual idea for a fund raiser: put together a team of Tess' former teammates to take on the current girls' high school team, which just happens to include Beth's daughter Jocelyn (Charlotte Graham).

At first it appears as though the idea will be stillborn. Even Beth's own husband Lawrence (Eric Roberts) is dismissive of his wife's efforts, proclaiming that she'll give up like she always does and (like all the town's unenlightened menfolk) referring to the screening truck as “Tess' traveling titty tester”. But Beth perseveres, eventually assembling her dream team of pothead/biker Roxie (Camryn Manheim), alleged slut Clementine (Virginia Madsen), car dealer/closeted lesbian Ginger (Daryl Hannah), and the predominantly white town's first black mayor Florine (Wanda Sykes). Now all she needs to do is get her team of middle aged misfits in shape and convince Coach Slaughter (Carl Palmer), who just so happens to be one of Clementine's exes, to accept their challenge.

Seidelman's direction is solid and professional, but the real strength of THE HOT FLASHES is its cast. These ladies all clearly relish the chance to play strong, intelligent characters who are the focus of the story they're in. But if you're expecting any deviation from the usual underdog sports comedy formula, you'll be sorely disappointed: Brad Henning's script is strictly by-the-numbers. At least the various character specific subplots (Beth's marital problems, whether or not Florine will compromise who she is to get re-elected, Ginger coming out of the closet, etc.) help give the film some flavor of its own.

THE HOT FLASHES clearly wants to convey feminist themes of empowerment and sisterhood, but it winds up undermining itself thanks to a few glaring missteps. For example, it takes the stance that it's wrong to judge Clementine for her sexual exploits, only to turn around and depict the slut shaming of one of the high school girls as okay because it helps our heroines. And then there's the weak ultimatum Beth makes to her husband near the end of the film which makes the character come off a bit too much like a doormat for a film about women standing up for themselves.

The older leading ladies in THE HOT FLASHES and the audiences who want to see them in films probably deserve more than it gives them. Still, it's at least passably entertaining and makes an effort to have some substance, and that's better than the literally nothing they'd have without it. The question is, does it really have to be that way? 2 1/2 out of 4 stars.