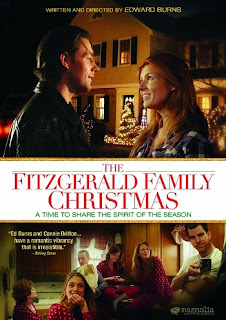 I hope your Christmas went well, but for those of us for whom the holidays prove to be an ordeal, writer-director-actor Edward Burns does a public service with THE FITZGERALD FAMILY CHRISTMAS. Whatever we went through pales in comparison to this ensemble.

Burns, of course, rose to prominence with THE BROTHERS MCMULLEN, a rare case of a crossover art-house sleeper. Here Burns makes another trip to the well of working-class NYC Irish-American family dynamics and dysfunction (same thing, sometimes), plainly directed, and heavy on the ethnic flavor.

The sons and daughters in the Fitzgeralds, of Queens, NY, are a big, less-than-happy Irish-Catholic family, and they approach Christmas embroiled in various romantic/marital uber-drama. Sister Connie's brute of a husband sulks badly in the saloon after losing a job opportunity (that's odd, I thought the movie was set in New York City, not Cleveland), and when she announces her unplanned pregnancy he is less than kind and understanding. Sister Dottie has discarded her husband, evidently a good guy, to embrace her inner slut for a clearly no-future affair with an Italian-American lothario. Another sister is heading towards a broken engagement. Another has just had a baby and is tied up in motherly duties (such as refusing to baptize the child Catholic because she's now an atheist).


Only Gerry Fitzgerald (Burns) doesn't have a heartache-in progress, mainly because his love train-wreck happened earlier, offscreen. You get to do that for yourself when you're writer-director.

Thus unencumbered, Gerry is the only one of the children who takes time out to spend with matriarch Rosemary (Anita Gillette) on her birthday, which happens to be inconveniently on the calendar two days in advance of Christmas Day. But Gerry has a hidden agenda in visiting his mom, to soften up Rosemary for a Noel visit by the Fitzgeralds' hated patriarch (Ed Lauter), who abandoned Rosemary for a younger woman 20 years earlier. Now dumped himself, he has a terminal cancer diagnosis.

Against all the other personal turmoil, Gerry tries to arrange a reunion among the contentious clan so the dying dad can ask forgiveness from his bitter brood, who, arguably, can trace their own travails back to his desertion - either that or to all being characters in an indie Ed Burns movie. That's a strong possibility as well.

Burns' filmmaking style is unforced and confident, and the ensemble cast of generally low-profile actors is uniformly fine. As if there might be any need for additional Irish cred, Malachy McCourt, writer and brother of Angela's Ashes author Frank McCourt, has a small role as a Catholic priest.

There are no magical sacks of mail proving the legal existence of Kris Kringle, or flying reindeer, or Ghosts of Christmas Breakups Past to bring the story to a satisfying close. Even if Burns is repeating himself on familiar territory a bit (something that doesn't bother Woody Allen fans with their artist and his milieu), FITZGERALD FAMILY CHRISTMAS and it's mature, non-mawkish theme of forgiveness, even just barely, that earn the little picture an acceptable treetop-star, being one of the non-formula Christmas dramas made by and for actual grownups. (3 out of 4 stars)