The East (now on video) 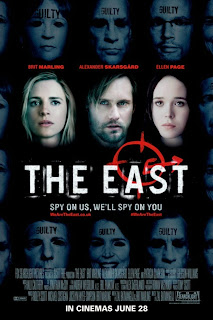 Sometimes the best way to get a good film role is to write it for yourself. That seems to be Brit Marling's philosophy, and so far it seems to have paid off. Although the actress has worked in films for other people, her most high profile roles have been in the movies she has co-written with her directors, 2011's ANOTHER EARTH (with Mike Cahill) and the same year's THE SOUND OF MY VOICE (with Zal Batmanglij). Marling teams with Batmanglij once again for the political thriller THE EAST, which is her best work both as writer and star to date.

Marling plays Sarah, a former FBI agent now working in the private sector. Her current assignment is to infiltrate a group of activists (or eco-terrorists, depending on your point of view) called The East. The information is then passed on to Sarah's superior (Patricia Clarkson), who delivers it to the corporate clients footing the bill.

Once Sarah is in with the group she starts to become friendly with its members, especially their de facto leader Benji (Alexander Skarsgård). She even starts to sympathize with their cause, but is troubled by some of their methods as the pranks they commit become increasingly dangerous to both their targets and members of the group, as well. Sarah's concerns prove to be founded when a prank conceived by Izzy (Ellen Page) as a way to get back at her father, the CEO of a chemical company guilty of dumping toxic waste, goes terribly wrong.

As the lead, Marling easily carries the film with a fine understated performance. Even though a fair amount of the role is just being the audience's entry point into the would of these underground activists, the character never fades into the background. I particularly liked the fact that Marling is upfront in portraying Sarah as a devout Christian without making a big deal about it or turning the character into a negative caricature. In fact, it's fair to say that Sarah's faith plays a significant and positive role in guiding the ethical decisions she makes. It's done with subtlety, but it's there in both the writing and the performance, and it matters. Page is also very good in an intense role that lets her get far away from the snarky slacker image of JUNO, and Skarsgård is compellingly believable as the sort of charismatic quasi religious figure that so often heads up fringe groups like The East.


Marling and Batmanglij have said they were inspired by seventies political thrillers when they wrote the script, and the finished product reflects that sensibility without coming across the slightest bit retro. THE EAST is sparing in its use of action tropes like car chases and shoot outs, but without shorting the audience of tension and suspense. The socio-political themes are upfront and treated with intelligence and nuance, neither superfluous to the plot nor overwhelming it. The film may be more sympathetic towards Benji and his followers than the corporate criminals they go after, but it also suggests with its conclusion that there are better ways to bring down the bad guys without compromising the moral high ground. 3 1/2 out of 4 stars.
Posted by Bob Ignizio at 12:00 AM