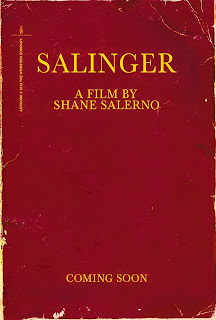 It's not that I haven't read a lot of books over the years. In fact until a few years ago I would go through 2 or 3 books a week, and even though a lot of what I've read falls into the category of pulpy horror/sci-fi/fantasy/crime, I've perused more than my fair share of respectable literature. But for whatever reason, I never read J. D. Salinger's The Catcher in the Rye. Which, as it turns out, is absolutely no obstacle to enjoying the documentary SALINGER because its subject led a pretty interesting life. He served in World War II, had several romantic affairs, and wrote a lot more than just Catcher in the Rye; mostly short stories for The New Yorker, but a few other novels, as well.

But Catcher is the book that Salinger will forever be known for, earning a reputation as a must read for the disaffected youth of several generations. The book has also been quite controversial over the years, with many finding it offensive and seeking to ban it. It also probably bears mentioning that three of its most ardent fans are wacko shooters Robert John Bardo, John Hinckley, Jr., and Mark David Chapman.

Of course what Salinger is really most famous for is being a recluse, having stopped publishing and largely dropping out of the public eye from 1965 until his death in 2010. But just because Salinger was out of sight didn't mean he had stopped working, or that his personal life was any less complicated. Through interviews with the author's friends, family, and former lovers, as well as correspondence and pre-recluse era interviews with Salinger, SALINGER gives a fairly complete portrait of the years both before and after the author's exit from public life, along the way making a fairly good case for the idea that it's sometimes best to separate the art from the artist.