[SUPERTHIEF is now available on home video and VOD.] 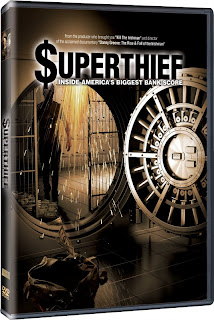 “If they ever built a burglary Hall of Fame, it’d be in Collinwood,” opines former Cleveland Chief of Police Ed Kovacic in SUPERTHIEF.

The documentary—now on DVD from Crooked Fence Productions / Dundee Entertainment—is filmmaker Tommy Reid’s second cinematic study of the colorful characters spawned during the mob wars of the ‘60s-‘70s on Cleveland's east side.

Like Reid’s 2010 biopic, DANNY GREEN: RISE AND FALL OF THE IRISHMAN, SUPERTHIEF draws from a book by Lyndhurst Police Chief (and jazz drummer) Rick Porrello and features testimony from authorities and La Cosa Nostra ex-cons who fought on both sides of the law in the turbulent seventies.  And just as Jonathan Hensleigh’s KILL THE IRISHMAN converted Reid’s documentary and Porrello’s book into a solid action pic for big-screens, SUPERTHIEF begs for Hollywood overhaul.

Rather than focus on Cleveland’s Italian-American mobsters per se, the 80-minute true-crime retrospect centers on burglar Phil Christopher’s headline-making 1972 heist of the United California Bank in Laguna Niguel, from which the alarm expert and his conspirators extracted a record-breaking bounty estimated between $30-70 million.  Subtitled BEHIND AMERICA’S BIGGEST BANK SCORE, the film lets Christopher tell his own tale (with contributions from cops, lawyers, and federal agents) and highlights the methodology—and moxie—that made their crime the most sensational bank burglary ever.

We’re told how rheumatic fever derailed young Christopher’s sports career, turning the teenager down a dark path in the early ‘60s.  Starting off as a doorman at gangster social functions in dry cleaning basements and restaurant back rooms, he absorbed the knowledge and confidence needed to muscle schoolmates for cash, steal cars, and knock over convenience stores.  Christopher gained further insight as an alarm systems expert and kept pace with the technology.  Lifelong Collinwood resident Buddy Pecnik speaks of how his old friend couldn’t help but enter a car dealership or grocery store and take note of their surveillance cameras and wired windows.

We learn through 2010 interviews with top-cop Rocco Pollutro, FBI agents Paul Chamberlain, and Cuyahoga Country Prosecutor Carmen Marino how Youngstown bad-boys Amil and James Dinsio masterminded the Laguna Niguel heist after hearing rumors that President Nixon stashed money and valuables there—as did many of the area’s affluent—to avoid reporting said wealth to the IRS.  The Nixon myth is debunked, but the Dinsio crew determines to head west and infiltrate the gated community.  Harry and Ronnie Barber sign on to handle transport and lodging.  Charlie Mulligan joins as a lookout.  Tapped for his safecracking and alarm-jumping expertise, Christopher brings buddy Charlie Broeckle along as an extra pair of eyes.

The team sets up shop in a condo overlooking the bank and—posing as birdwatchers and joggers—scopes out the side days in advance.  Christopher swipes a utility ladder from a nearby church but can’t locate the phone wires he needs to bypass the bank security.  Unwilling to admit defeat, he talks the group into a second attempt and successfully jumps the on-site audible alarm, disengages the remote silent alarm, and breeches the time-lock vault.  Inside, the goodfellas use customized sledgehammers to unburden some 500 safety deposit boxes of their diamonds, gold, and bearer bonds.

The L.A. investigators are dumbfounded by the burglar’s sophistication, but the sum of the loot taken—and the elite social status of its rightful owners—prompts a nationwide call for help.  No leads turn up until Christopher and the Dinsios pull off a similar job in Lordstown, Ohio, causing police to pressure Mulligan.   It doesn’t help that Christopher and Broeckle used their real identities when flying to California instead of aliases; detectives quickly connect the dots when the crooks’ names pop up on a passenger manifest.

Christopher earns early release after three years in Terra Haute prison, but a pesky Plain Dealer reporter gets the parole rescinded after connecting him to a 1968 homicide.  Reunited with wife Mary Ann after nearly thirty years behind bars, Christopher reflects on his criminal past and ponders what might’ve been.

A peculiar, mutual admiration between crooks and cops emerges as the story unfolds.  Every lawman interviewed agrees Christopher and his friends were smart enough to have been successful in just about any legitimate line of work—but they wouldn’t have gotten the same “rush” at a 9-to-5 job.  Conversely, the conmen appreciate police efforts to crack the case and—being nonviolent offenders—know when the jig’s up and when to acquiesce without bloodshed.

SUPERTHIEF’s emphasis on interviews and vintage black-and-white photos gives it a History Channel feel (the funky, PEOPLE’S COURT-like score doesn’t help) .  It’s one thing to see and hear sexagenarian Christopher talk about potentiometers and pry bars from the comfort his living room sofa (with pictures of his grandkids in ballerina tutus in the background).  It’d be quite another to actually see these tools being used—to see these guys dynamite the bank rooftop and trip the time-locked vault—even in a low-budget recreation.  Still, it’s a solid standalone documentary and terrific tie-in with both Reid and Hensleigh’s IRISHMAN efforts (even “Shondor” Burns reappears).  2 ½ out of 4 stars.

DVD available here:
http://www.osirisent.com/details.php?products_id=427&categories_id
Posted by Bob Ignizio at 12:00 AM