Portrait of Jason (December 7th and 8th at the Cleveland Cinematheque)


[PORTRAIT OF JASON screens Saturday December 7th at 9:25 pm and Sunday December 8th at 6:30 pm at the Cleveland Cinematheque.] 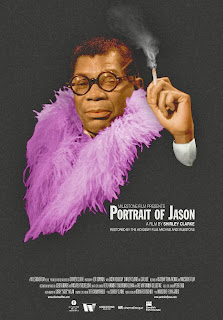 I can't really recommend you visit University Circle for very much this holiday season. Too much sordid stuff going on. You know that sprawling display of gingerbread houses at the Cleveland Botanical Garden? Police just found that inside one of them there was a gingerbread man holding several gingerbread women hostage as sex slaves for ten years.

Yes, well, I would like to know how stable YOUR mind would be if you had to watch about seven hours of Power Rangers Zeo just to make $20 with a freelance review. Mine is a career that male prostitutes look at and say, "Well, at least I can tell my folks I didn't end up like Charles Cassady."

Speaking of male prostitutes, not far from the disgraceful Botanical Garden and just in the shadow of the scandal-stained Cleveland Museum of Art, the Cleveland Cinematheque is this weekend showing a revival/restoration of PORTRAIT OF JASON. "It's about time," I can imagine young online readers saying. "I hate all that gay crap and foreign junk they usually show. Is this, like, a prequel about Jason, and how he killed his first victims even before Camp Crystal Lake? Is it a big-budget reboot, with Sally Fields as the homicidal Mrs. Vorhees? Will there be 3D sequences, and bloody brains and eyeballs flying into your field of vision, like there was in FRIDAY THE 13TH PART III?"

Well...not in the cut I screened, anyway. PORTRAIT OF JASON is actually a celebrated 1967 experimental documentary, much discussed (especially when I was a young film student, never dreaming I'd earn more money writing about Power Rangers) by Shirley Clarke. I'd known it by reputation, and the premise that it concerned a black, gay hustler and addict, kind of going to pieces for Clarke's cameras. It was said to be heartbreaking and riveting. Well...

I had always mentally pictured the film's Jason Holliday as a kind of doomed Byronic figure, maybe looking like a young Gregory Hines or Jean-Michel Basquiat or even Tupac Shakur. So my first sign of trouble was how the hero of PORTRAIT OF JASON - the only person onscreen throughout the whole 105 minutes - looked with his thick goggle-glasses. Jason is a lot more like TV sitcom-land's nerdy `Urkel.' As Kanye West used to say before he sold out to reality TV, "Ohhellno!"

Holliday, so the story goes, sat for PORTRAIT OF JASON in cooperation with Clarke and her one-man crew `Carl' in a single 12-hour, black-and-white filming session/interrogation in NYC's Chelsea Hotel that lasted all night long in late 1966. There are points in it when Jason is in mid-story and Clarke doesn't want to loose his momentum, when the film runs out, and we hear just the audio (recorded separately) while someone changes the celluloid magazines, so important did this seem at the time. Certainly in an era in which THE SOUND OF MUSIC was still playing theaters, that PORTRAIT OF JASON, feeling like one long, continuous take of an unforgettable character, must have been groundbreaking.

Speaking in an accent with I tend to associate with rural Ohio east of Columbus (no Gregory Hines), Jason Holliday, who was born Arthur Payne in New Jersey, talks flamboyantly about how he went to San Francisco to re-invent himself. He describes working, when not turning tricks, as a "houseboy" for wealthy white matrons. Sounds like his fey demeanor got him considered practically one of the girls by his lonely-socialite employers, and there are some pungent observations on relations between the races and classes. Imagine a queer twist on DRIVING MISS DAISY, if you must. Jason claims he's gotten together with a musician and is going to do a cabaret show on his life and times. He proves he can carry a tune by busting out with some Broadway numbers (way to go at upsetting homosexual stereotypes, Mr. Holliday - but is Glee any less guilty?).

The interview goes on and on, in the same minimalist terms, Carl sometimes goading Jason or challenging the
veracity of his statements (since one can barely hear Carl, it's tough to figure out what he's trying to clarify). Finally, after hours of this, Jason breaks down in tears (memories of his mama being a catalyst). This is what, according to its champions, gives the documentary its narrative arc, watching the guy's tortured soul stripped bare. But I've got these observations:

- Jason crumbles after about 12 hours of nonstop interviewing. Who wouldn't? You could probably turn me into a sobbing wreck after about 70 minutes talking about how my life went. Just keep going back to my ex-jobs, my ex-girlfriend, and that I earn money watching Power Rangers.

- Among other types of queens, Jason is a drama queen. One nurturing a notion to be a cabaret performer. I am rather mistrustful of performing artists and their confessionals; is it not unreasonable to postulate that his marathon film session for Shirley Clarke was one big, calculated "act", complete with his loss of bravado and weepiness? Was Jason the first "reality" star?

- At no point does Jason lose the iconic hockey mask to show us a gruesome, deformed, rotted skull-face, one of the best creations of makeup maestro Tom Savini. Total ripoff, man!

Truly, Holliday/Payne is a great character, like someone right out of the pages of John Rechy. I do not know much about his bio outside of this film, and certainly nothing about his subsequent life except that he died in 1998 (wasn't a good year for me either). It is a mystery to me whether, after minor cult-documentary notoriety, this hustler turned into a faded, sad old fop...or a LGBT-studies/film/race/Broadway musicals professor at some overpriced liberal-arts college. And is there a difference?

After all the hype that had  preceded it for me, I must confess that PORTRAIT OF JASON did not engage me compared with such artfully filmed one-man shows and solo-monolog movies as MONSTER IN A BOX or LIFE OF REILLY or THE CRUISE. But that is an unfair comparison. And even I know that likely none of those, let's face it, would probably ever had existed without the trail blazed by PORTRAIT OF JASON. (2 3/4 out of 4 stars)