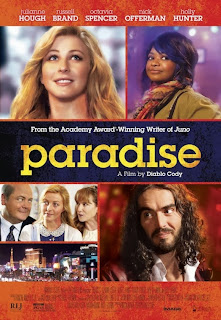 Just about every year some entertainment writer (who's not laid off yet) announces it's the "Year of the Woman" in film or TV because Tina Fey has another magazine cover shot, or something. I always love that: `Year of the Woman.' Notice that it's never Year of the WOMEN. Like, there can be only one at a time. "Move over, Kathryn Bigelow, you're done, crone. This Catherine Hardwicke is the hot new... Oh, get out of here, Catherine Hardwicke, Kristin Wiig is the It Girl right now. Oh, Kristin Wiig, take your wrinkly, menopausal self out of our sight, we like Lena Dunham now." By the time this review runs, some other fresh meat will get Lena Dunham's premium parking space.

Diablo Cody was a hot property with her celebrated script for JUNO, catapulting her to majors, nabbing her a column in Entertainment Weekly, and gaining her a director's chair. But Cody's much-anticipated followup was the teen-horror semi-satire JENNIFER'S BODY...Which wasn't even bad, in my opinion, especially by the gutter standards of most teen-horror. But it was still ungood enough to cost Diablo Cody the Dorothy Parker esteem that the media had briefly bestowed upon her. That and maybe daring to get a year or two older than she used to be. The bitch.

PARADISE, Cody's latest writing/directing job, is now making it to most of us in Flyover Land via home video. That's gotta hurt. But if $200 million actioners and superhero (or ANCHORMAN) sequels are the state of the industry, maybe the small screen is a more suitable venue for Cody's wit. PARADISE does open with a grabber. Lamb Mannerheim (Julianne Hough), 21, a cute religious girl from a really, really conservative Montana town, has emerged from the hospital swathed in flesh-colored support hose and dosed on pain killers; she survived a plane crash, the skin of her body broiled by jet fuel. In a gala return-appearance to her church, Lamb shocks cartoony Christians by announcing her angry, new disbelief in God, followed by her support for science and evolution, and intention to leave town and mix with homosexuals and Democrats.

With tons of money thanks to her accident settlement, Lamb heads to Las Vegas (even though this picture was largely filmed in Louisiana; the deception is quite good), to commit all the sins that she missed out on growing up in a sheltered, faith-based childhood. Quickly she bumps into a couple of jaded Vegas pals who become her co-protectors and guides to the city. Lorraine (Octavia Spencer) is a "bar-tainer" singer in a dive, along with British bartender and ladies' man William `the Conqueror' (Russell Brand). Concerned about the girl's fragile state, they nonetheless lose track of her for a few hours, while Lamb binges on unaccustomed alcohol. In the end they all learn some Life Lessons, and Lamb ends up older, wiser and happier with what she's got, scars and all.

Part of the problem with PARADISE is that, as much as Lamb is described as a wounded innocent, a country girl so naïve she doesn't know better than to pack her own dishes for the trip in case the Big City doesn't have any, her narration and attitude are still partially Diablo Cody-esque - a savvy voice of someone who knows last week's Top Ten everything. Lorraine and William are also pretty much knock-off Diablos (call them Dialb1 and Diabl2, I guess), having their too-clever little arguments with one another. Which can be brilliantly entertaining conversation, as long as you don't mind that nobody really talks like this (especially in confirmed Profanity World Capital Ohio).

One especially Cody-esque exchange has Lorraine criticized as a "magical negro," dispensing wisdom and advice to the Anglo heroine, a scriptwriting trope that according to the DVD commentary was a dig at Octavia Spencer's character in THE HELP. But this movie is itself filled with such E-Z devices, as the "magical bartender" and the "magical prostitute." Cody even acknowledges that herself. At least the writer/director/smarty-pants is smart enough not to build up to any big-reveal scene, where Lamb takes off her clothes and shows the full extent of her disfigurement courtesy makeup f/x magic. Which makes Diablo Cody smarter than 90 per cent of professional scripters. Either that or desperate to retain a PG-13 rating. Probably a bit of both.

Maybe PARADISE didn't get a wider release not because it was such a modest, low-yielding effort but because the tastemakers know that, for real, raw emotion and explorations of religion, decadence and body image, it pales next to Austrian filmmaker Ulrich Seidel's similarly-titled "Paradise" trilogy, PARADISE: LOVE, PARADISE: FAITH, and PARADISE: HOPE. Yeah, that's the ticket. Of course not, what are the chances? Who is being the smarty-pants now? (2 3/4 out of 4 stars)