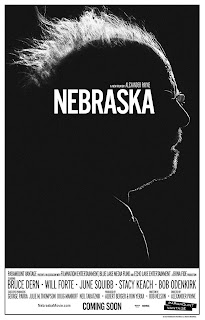 Shot in dingy “indie” black and white (as opposed to silvery “classic Hollywood” black and white), Alexander Payne's NEBRASKA is a dramedy/road movie about an old man (Bruce Dern) trying to hold on to the last shreds of his dignity and independence while the son who barely knows him (Will Forte) aids and abets his old man on a foolish quest in the hopes of finding some sort of connection before it's too late. It's a premise that proves fertile ground for both laughs and pathos, and seems almost certain to collect a good number of awards season nominations (and very possibly some wins). The best part is that it manages to do all this without resorting to artificial sentimentality.

We first meet Woody Grant (Dern) as he attempts to walk from his home in Billings, Montana to Lincoln, Nebraska, his goal ostensibly being to collect a million dollar prize he believes he has won in some sort of Publisher's Clearing House style sweepstakes. Then again, maybe Woody just wants a little something to give his life some purpose and direction, if only for a while. However, Woody's long suffering wife Kate (June Squib), who is more than capable of dishing out some suffering of her own, isn't about to let the possibly senile and most definitely alcoholic old man follow through on his pipe dream.

Woody's sons David (Forte) and Ross (Bob Odenkirk) both back their mom up at first. Eventually, though, David begins to realize that his dad is bound and determined to make the trek. He also realizes his own life is in a pretty sorry state, so he really has nothing to lose by driving his dad to Lincoln. Along the way Woody suffers a minor injury that puts the father and son off schedule, and also provides an excuse to stop for a while in Woody's old home town to visit with friends and relatives (and for Kate and Ross to drive out, too). It's a fairly mundane reunion at first, but once everyone finds out about Woody's supposed fortune, they all want a piece of it.

It's through these friends and family members and the stories they tell that David and the film begin to assemble a fuller, if seemingly contradictory, picture of Woody. Was he a quiet, damaged Korean war vet who got in trouble because of a willingness to do favors for just about anyone who asked without any thought of being paid back, or was he a selfish drunk who took advantage of and thoughtlessly hurt those closest to him?

Aside from its plot, NEBRASKA features a number of nicely observed little moments: Kate rattling off gossip about long dead relatives and neighbors, a living room full of old men making small talk between long pauses while watching the game, and just the general sense of small town life all have the ring of authenticity here. Even if the plot went nowhere, there would be little to regret about spending time in the world NEBRASKA depicts and the characters who populate it. But the plot does go somewhere, albeit at its own pace and in its own way, and when it arrives at its final destination it's a more than satisfying conclusion to the film's, and Woody's, journey. 4 out of 4 stars.
Posted by Bob Ignizio at 1:13 AM