**Note: we're doing our best to catch up on some of the films that slipped through the cracks here at the Cleveland Movie Blog. I believe MOVIE 43 did have a screening, but at the time no one was available to cover it. It's on Netflix instant at the moment, so I figured what the Hell, I'll check it out. 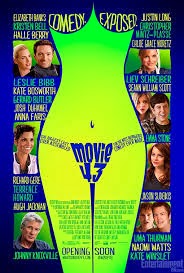 Some people like to slow down and look at automobile accidents. I have a morbid curiosity about bad movies. That's why, against all better judgment, I've watched things like GIGLI, GLITTER, and many more universally panned turkeys. Sometimes one finds campy entertainment value, as in SHOWGIRLS. On occasion, I even wind up liking movies that everyone else seems to hate, as was the case with HANSEL AND GRETL: WITCH HUNTERS. So with virtually every critic on earth declaring MOVIE 43 the year's worst film, I had to get around to it eventually. Well, it may not be my pick for the worst of the year (I'm leaning towards PLANES at the moment), but it sure isn't very good.

MOVIE 43 is held together by an unengaging framing sequence in which a mentally unstable writer (Dennis Quaid) is pitching a script at gunpoint to a low level studio executive (Greg Kinnear), with each segment then springing to life as Quaid reads the script. I'm not proud of it, but the first segment made my inner twelve year old laugh quite a bit. Beth (Kate Winslett) goes on a date with Davis (Hugh Jackman), an otherwise perfect catch – rich, good looking (he's Hugh Jackman), smart, and charming – who just happens to have a pair of testicles hanging from his neck. It's basically one juvenile joke stretched to the breaking point, but Peter Farrelly's direction sells it. This turns out to be the high water mark for the movie.

That said, there are a few other relative bright spots along the way. Brett Ratner delivers a modestly funny segment in which Johnny Knoxville captures a leprechaun to steal its gold as a way of apologizing for sleeping with Sean William Scott's girlfriend. The violence might be off-putting to some viewers, but anyone used to Troma films and the like should be fine. And speaking of Troma, TROMEO AND JULIET screenwriter (and director of next year's GUARDIANS OF THE GALAXY) James Gunn almost scores with “Beezel”, a post credits segment in which an animated cat comes between his owner (Josh Duhamel) and the owner's girlfriend (Elizabeth Banks) in some fairly disturbing (and funny) ways. Unfortunately the segment can't seem to figure out a satisfying ending and just goes over the cliff.

I also got a few politically incorrect chuckles out of Rusty Cundieff's (FEAR OF A BLACK HAT) sports film parody. Terrence Howard plays the coach of an all-black basketball team some time in the not too distant past, probably early 60's. The joke is that Howard's team are scared to be going up against an all-white team for the first time. It proves remarkably hard for the coach to overcome this fear despite what he sees as one very important advantage his team possesses. Like the balls on the chin gag in the first segment, the one joke here gets pretty much beat into the ground, but the segment ends right about when it starts to get old.

Despite the presence of some fairly big names both in front of and behind the cameras, the remaining segments in MOVIE 43 are pretty bad. There are a few scattered laughs, but overall it doesn't matter who the writers, directors, or cast in each segment are; most of MOVIE 43 is unfunny and frequently mean-spirited (not to mention juvenile and tasteless, although that's not really an issue for me when it's done well – see my review of BAD GRANDPA). Yes, there are a few laughs, but even the segments I'm giving a pass to aren't good enough to warrant actually going out of your way to watch the movie. 1 1/2 out of 4 stars.