[INVITATION TO THE DANCE screens Tuesday December 31st at 1:30 pm at the Cleveland Museum of Art Morley Lecture Hall.] 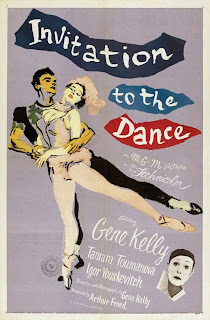 INVITATION TO THE DANCE is one of the rare financial flops to come out of the legendary Freed Unit at MGM that created so many brilliant Technicolor musicals that practically defined Hollywood entertainment (and were, in fact, excerpted/exhumed for the THAT'S ENTERTAINMENT docu-series). Not even many critics warmed to the feature - yet it's one of the purest expressions of dance ever to come out of the American film industry. Or did you think the Wayans’ DANCE FLICK was?

After years as a top MGM musical draw, the great Gene Kelly finally got to direct his dream project. You know of how musicals, especially under the MGM brand, draped amazing musical-production numbers on flimsy rom-com excuses for plots? Kelly imagined just dumping the silly script altogether and presenting four long dance numbers, not as "dream ballets" drop-ins to existing narratives, but nonverbal storylines complete unto themselves.


I do wonder if inspiration might have been 1951's UK lushly filmed anthology of Offenbach, TALES OF HOFFMAN, which snob critics embraced much more so than this movie. INVITATION TO THE DANCE drew paltry ticket buyers when it opened in 1957, on far fewer screens than a more traditional MGM extravaganza.

The production was a troubled one, going over-budget (Kelly was a notorious perfectionist, take that Stanley Kubrick) and requiring a score rewrite by Andre Previn. One of the segments was eventually scrapped, reducing INVITATION TO THE DANCE to a trilogy. Yet, what a delightful trio to rediscover!

Gene Kelly is the connection, appearing in all three of the segments. Other roles are filled not by the Astaires or the Garlands but names known chiefly to the dance crowd - Igor Youskavich, Claire Sombert, Carol Haney, and UK figure skater (and WWII G.I. blonde pinup) Belita. Plots are easy to understand without words. There's a tragic circus love triangle, with Kelly the Pierrot-style clown who adores a trapeze artist from afar, even though her heart belongs instead to a fellow high-wire performer. "Ring Around the Rosy," the second part, is an all-dancing version of "La Ronde," following the voyage of a bracelet as it passes through a circle of unfaithful big-city lovers, one couple to another.

The finale, the longest episode, is the real showstopper, "Sinbad the Sailor." It matches Gene Kelly, this time as a US Navy tar (Sinbad an American Navy man? No wonder Arabs hate us) against a purely fanciful cartoon backdrop and Arabian-Nights-type characters, created by the Hanna-Barbara cartoon studios. Conceptually, this was a grandiose extension of the famous bit in MGM's ANCHORS AWEIGH in which Kelly danced with in-house cartoon characters Tom and Jerry.


INVITATION TO THE DANCE is to MGM's Freed Unit what FANTASIA was to Disney: a bold, stylish experiment that wasn't fully appreciated at the time and, in fact, put some folks off. But FANTASIA, in just a few decades, won acclaim on the revival circuit and gained acknowledgment as a true classic (and hippie audiences got high to it). INVITATION TO THE DANCE, by contrast, has even been cited by some cranky types as a disaster from which Gene Kelly's career never fully recovered. Well, maybe in everything-for-a-buck showbiz, that's a fair diagnosis. But don't listen to the haters; RSVP to this INVITATION. (3 3/4 out of 4 stars)