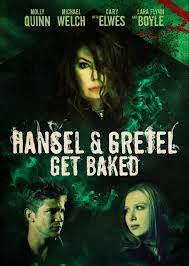 On this fateful anniversary I think I've solved the JFK assassination. A very young George Zimmerman was in the book depository, drunk and surly, complaining about his girlfriend troubles with his hunting buddy Lee Harvey Oswald. Zimmerman started waving his loaded rifle around, and Oswald said, "You better put that thing away before it goes off and someone gets hurt." Offended at this affront to his Second Amendment rights, Zimmerman struggles violently with Oswald over the weapon just the presidential motorcade passes by, and, well, the rest is history.

Okay, what's that got to do with the direct-to-DVD horror sort-of-comedy HANSEL & GRETEL GET BAKED? Well, prominently billed actress Lara Flynn Boyle once appeared as a Kennedy woman in a TV biopic. Or maybe she didn't... Sure, I can confirm this easily via any decent online search of her filmography, but I may find out I am incorrect, which would make my first paragraph even more irrelevant and bring shame upon my dojo.

A drug-infused horror-gore semi-satire directed by Duane Journey, HANSEL & GRETEL GET BAKED attempts, as the Warren Commission would surmise, to ride the coattails of the bigger-budgeted, theatrical HANSEL & GRETEL - WITCH HUNTERS that came out early in 2013. I have not yet had the `pleasure' of experiencing HANSEL & GRETEL - WITCH HUNTERS, but I would not be very much surprised if it were not terribly good. As for this one, speculation is not necessary. Hansel (Michael Welch) and Gretel (Molly Quinn) are modern city siblings. She's an avowed pothead of a teen blonde hottie, while he's an internet geek/digital photographer (and, befitting his nerdiness, a virgin). Their community has been invaded by an especially potent marijuana strain called Black Forest, which is being peddled by a senior-citizen named Agnes (Boyle).

Black Forest eventually entices Hansel, Gretel, an envious ghetto dopeman and his gangbangaz, and a number of other reefer-oriented victims into her Agnes's lair. Unsurprisingly, Agnes is actually a witch - one with Nazi-Germany connections, never made clear. Agnes regains her youth by devouring young folks. And, because of all that potent pot in her hangar-sized growth chambers, she has the munchies realll bad.

Troma Studios might have done this sort of material as a manic splatter-thon, and we all know the Lloyd Kaufman brand of grossout burlesque and shock slapstick can be darned guilty-pleasure entertaining. And there are cute touches here such as Gretel leaving a trail of Skittles rather than bread crumbs. But mostly HANSEL & GRETEL GET BAKED follows a relatively straightfaced path, and one's humor buzz turns bummer with the first torture-porn human skinning/dismemberment. At least it did for me.

At some point one must address Ms. Boyle, whose face is kind of like Dolly Parton's in JOYFUL NOISE. Oh, the humanity! What were you THINKING, ladies?  That plastic surgery just can't be ignored anymore. I don't know at what point onetime Twin Peaks vixen Boyle obtained exaggerated pouty lips, cheeks and facial contours Not Found in Nature (except maybe in James Cameron's AVATAR). But it's the dubious voyeuristic highlight of HANSEL & GRETEL GET BAKED that her cruelly altered visage fits the plot's concept of her paranormal crone aging in reverse.

Discuss among yourselves if that was a really cool notion (maybe even more so than anything was in HANSEL & GRETEL - WITCH HUNTERS) or as tasteless as what Old Hollywood did with poor old super-deformed Rondo Hatton - Google that name, kids, you'll learn something. And wonder if roles even as suitable as Agnes will exist for our generation of ungracefully aging starlets who went under the knife.

Would JFK have let Marilyn do that do herself? I ask that mainly to restore honor to my dojo. (1 3/4 out of 4 stars).