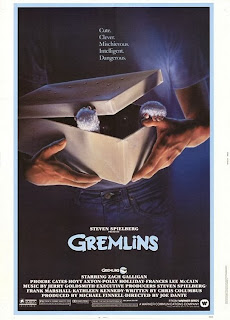 Christmas is supposed to be a time filled with carolers and holiday joy, but for poor Billy Peltzer, the central character of GREMLINS, things couldn't be worse: his father, a hapless inventor, can't seem to make a product that works, the local owner of the bank he works at despises him, and the girl of his dreams has nothing but bad memories surrounding the yuletide season. Nope, things don't seem to be looking too good for Billy.

But one evening his father brings home a very special Christmas present for Billy, a cuddly, cute little ball of fur called a Mogwai. Billy's new pet (which his father names Gizmo) seems pretty low maintenance. In fact, the adorable little guy only comes with three rules that have to be followed; 1) Don't get him wet, 2) Don't expose him to sunlight, and 3) Never, ever feed him after midnight. Sounds simple enough, but before long two of the rules are broken.

Billy's pal Pete accidentally spills water on poor Gizmo, which causes the creatures skin to bubble and pop out tiny little fur balls that grow into more cute, cuddly looking Mogwai. But looks are deceiving, and these new critters don’t share the same friendly disposition as Gizmo. In fact, they are downright maniacal, and right off the bat they trick Billy into feeding them after midnight, breaking the second rule. The post midnight snack causes the cute little creatures to metamorphose into horrible, green skinned little monsters that break out of Billy's bedroom and terrorize the small town of Kingston Falls. It's up to Billy and the girl of his dreams to stop these little terrors before they take over the town.

As directed by Joe Dante, who made his big splash onto the genre scene with PIRANHA (1978), GREMLINS is quite the spirited holiday picture. The first quarter of the film really reminds me of the holiday movies of the forties and fifties, with the picturesque scenes of the Christmas season overflowing through the small town. about thirty minutes in, though, and you realize this is going to be a much darker and satirical tale then you are used to from your average holiday film, unless your average holiday film experiences include angry little monsters trying to take out humans in a variety of horrifying ways. It may be a little too intense for the very young kids out there - I mean, the gremlins are murdering townsfolk and whatnot - but the older kids and adults will truly appreciate the very cartoonish set pieces on display in the film.

Originally released in 1984, its hard to believe that GREMLINS is approaching its thirty year anniversary next year. Everything about this movie holds up incredibly well after nearly three decades. Much of the credit for it being as good as it is after all this time goes to special effects wizard Rick Baker who, along with his crew, brings these characters made of foam latex and fake fur to life in spectacular fashion. That's right kids, there was a time when movies used actual physical effects to create monsters rather than rely on computer artists to turn ones and zeroes into scary, but never totally convincing creatures. Upon re-watching the film for this review, I again completely bought into the reality of Gizmo as a living breathing thing. And the gremlins themselves are still as terrifying and fun as ever.

It’s hard for me to believe that anyone reading this hasn’t already experienced GREMLINS' wonderfully skewed take on holiday entertainment, but if you haven’t, take the time and treat yourself to this really great example of eighties fantasy filmmaking.
Posted by Unknown at 12:09 AM