Faust (December 6th and 8th at the Cleveland Museum of Art)

[FAUST screens Friday December 6th at 6:30 pm and Sunday December 8th at 1:30 pm at the Cleveland Museum of Art.] 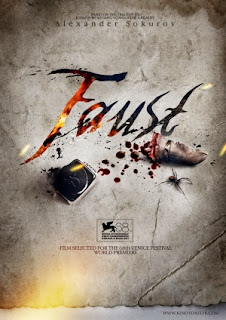 Thanks to the Cleveland Museum of Art and the Cleveland Institute of Art Cinematheque, Christmas arrives early this year for local cineastes. This weekend, the latest works from two of the world’s greatest filmmakers (China’s Jia Zhang-ke and Russia’s Alexander Sokurov) receive their local premieres. If that’s not an occasion for Festivus revelry, I don’t know what is.

Frustratingly (I almost said, “inevitably”), both Jia and Sokurov remain best known in this country by festival habitues rather than arthouse mavens. I guess that’s what happens when the big dogs on the specialized circuit (Searchlight, Sony Classics and Weinstein) aren’t interested in distributing your films. But to quote Linda Loman, “Attention must finally be paid.”

FAUST is the final entry in Sokurov’s extraordinary “Men of Power” series (Hitler, Lenin and Hirohito were his previous subjects) and finds the Russian master in a less austere, minimalist mode than usual for the heir apparent to the late Andrei Tarkovsky. At times, the near-hallucinatory imagery recalls maestro fabulist Terry Gilliam.

The phantasmagorical German Village of FAUST with its teeming, roiling streets and funky, musty interiors (cinematographer Bruno Delbonnel does amazing work here) is so tactile and multi-sensory you can almost feel the grit building underneath your fingernails just watching it enfold. Taking the form of an adult fairy tale, Sokurov’s free translation of Goethe’s allegory is the antithesis of such spartan Sokurov masterworks as RUSSIAN ARK, MOTHER AND SON and ALEXANDRA. The relationship between Dr. Faust (Johannes Zeiler) and demonic Shylock Mauricius (Adam Adasinsky) is fraught with incipient horror and also contains a surprising amount of Rabelaisian wit. (Yes, dear readers. Sokurov can indeed be funny.)

The sad truth is that Sokurov will never become a household name in this country. After all, it’s not the 1960‘s anymore, a time when equally “difficult” auteur directors like Antonioni, Bergman and Resnais were the bread and butter of the American arthouse circuit. Sokurov’s rarefied, often sublime films remain, I suppose, an acquired taste. Here’s hoping more so-called cinema cognoscenti obtain it.  4 out of 4 stars.