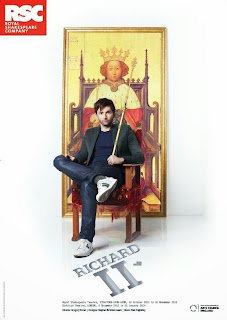 The Royal Shakespeare Company (RSC) in collaboration with Picturehouse Entertainment is pleased to announce that Gregory Doran’s production of William Shakespeare’s  RICHARD II with David Tennant will be the first broadcast of “Live from Stratford-upon-Avon,” a program that will screen the RSC’s productions from Shakespeare’s home town around the world.

In Cleveland, RICHARD II will screen exclusively at the Capitol Theatre (1390 W. 65th St., Cleveland) and the Cedar Lee Theatre (2163 Lee Rd., Cleveland Hts.) on Sunday, December 8th at 11:00 AM and Wednesday, December 11th at 7:00 PM. Tickets are $20 and are on sale at the theatre box office and online at clevelandcinemas.com.

RICHARD II is directed by RSC Artistic Director Gregory Doran with David Tennant (Doctor Who, Broadchurch) in the title role; the production opens at the Royal Shakespeare Theatre, Stratford-upon-Avon this October and was captured live during the November 13 performance.  The RSC is also opening up its work behind the scenes through a series of short films available online during the run-up to the screening as well as live footage on the night, before the show, and during the interval. The first film can be seen here: http://www.rsc.org.uk/whats-on/richard-ii/video-production-diary.aspx.

Gregory Doran, RSC Artistic Director, said today; “We are thrilled to be bringing the work we make in Stratford-upon-Avon to the widest possible audience. Through a brand new partnership with Picturehouse Entertainment, who have a great track record in screening the arts live, we can share the RSC’s contemporary interpretations of our house playwright across the UK and around the world, direct from Shakespeare’s home town.”
RICHARD II plays in Stratford-upon-Avon from October 10 - November 16, before it transfers to London’s Barbican Theatre until January 25 2014.

The broadcast of RICHARD II will be the first of four RSC Shakespeare plays to be filmed live during the next year, and is the start of an on-going program to make the Company’s work more available to a nationwide and global audience.

Live from Stratford-upon-Avon is generously supported by the Sidney E. Frank Foundation.

About the Royal Shakespeare Company
Made in Stratford-upon-Avon - Seen around the world
Everyone at the Royal Shakespeare Company, from actors to technicians, milliners to musicians, plays a part in creating the world you see on stage. Our work begins its life at our Stratford workshops and theatres and we share it with audiences across the world through our touring, residencies and online activity. So, wherever you experience the RSC, you experience work that is made in Shakespeare’s home town in the UK. Shakespeare has been performed and celebrated in Stratford for centuries and the RSC has trained generations of the very best theatre makers since the Company was founded in 1961.  We pioneer contemporary approaches to Shakespeare’s plays, as well as staging the work of those who inspired him and the work of today’s playwrights. www.rsc.org.uk

Picturehouse Entertainment is the distribution arm of Picturehouse Cinemas, the owner and operator of 21 Picturehouse Cinemas and programming agent for a further 49 venues across the UK.
Since its launch in 2010, Picturehouse Entertainment has distributed a diverse range of alternative content to cinemas throughout the UK and internationally. This includes live satellite broadcasts of seasons from world-class arts organizations, such as the Royal Shakespeare Company, the Bolshoi Ballet and the National Theatre, and special one-off events such as Stephen Fry’s talk, The Fry Chronicles, and David Bowie is happening now transmitted from the V&A’s sell-out exhibition.

Picturehouse Entertainment’s feature film releases include BAFTA winner The Imposter, Shane Meadows’ The Stone Roses: Made of Stone, Ben Wheatley’s A Field in England and the forthcoming The Pervert’s Guide to Ideology featuring Slavoj Žižek, in cinemas from 4 October 2013.