*Note: we're doing our best to catch up on some of the films that slipped through the cracks here at the Cleveland Movie Blog. As far as I know, BAD GRANDPA was never even screened for critics (go figure). But it's still showing in theaters, so I finally got around to seeing it. Here's my review, better late than never.
Review by Bob Ignizio 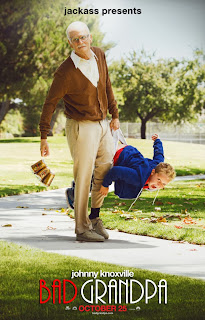 Filmmaker John Waters has said, “...one must remember that there is such a thing as good bad taste and bad bad taste.” Johnny Knoxville, Spike Jonez, and Jeff Tremaine get the distinction. For a little over a decade, these three and their compatriots have made successful careers out of peddling good bad taste via the MTV show Jackass and its cinematic spin-offs. Their modus operandi has always been staging elaborate stunts and practical jokes that invariably go for the gross out factor, and if that's your sort of thing, it's fair to say they are the masters of that particular niche. Jonez has of course directed and co-written narrative feature films such as WHERE THE WILD THINGS ARE and this year's HER, and Knoxville has acted in several Hollywood films. Up until now, though, the entire Jackass brain trust has never collaborated on a feature film with actual characters and a story.

The “plot” is that the recently widowed Irving Zisman (Knoxville in the convincing old man get-up he's worn on the Jackass show a few times) is stuck transporting his grandson Billy (Jackson Nicoll) to stay with his no-good father while his no-good mother goes to jail. The rest of the movie is just a series of gags in which either Irving or Billy or both do outrageous things in front of real people who react accordingly. In that sense, it's kind of like an even less scripted Sacha Baron Cohen film. By all rights it should completely fall apart, and at times the movie does threaten to. Somehow, though, this raggedy collection of gags holds together enough to reach a satisfying conclusion for its slight narrative.

Like that really matters much. The main attraction here are the gags, at least assuming you don't find jokes about projectile diarrhea or an old man getting his penis stuck in a pop machine inherently unfunny. Another film and another comedian doing similar jokes might not have made it work, but Knoxville and his gang manage to deliver the gross-out goods. Which isn't likely to matter to those who, unlike John Waters, don't really see the difference between “good” bad taste and “bad” bad taste.

As outrageous as it all is, for the most part the humor in BAD GRANDPA is good natured and at the expense of Knoxville, who in some cases puts himself in real potential danger of an ass kicking in order to get strong reactions from his unwitting costars. The only time the joke is on someone else, and with a definite edge to it, is the segment where Billy dresses in drag for a “Honey Boo Boo” type kiddie beauty pageant. As far as I'm concerned, you can't really rip on that sort of creepy, borderline child abuse enough. And yet even there, while the gag makes its satirical point, the filmmakers and cast never get as mean spirited as Sacha Baron Cohen would. One gets the sense that these guys, as tasteless and crazy as they are, just like people too much to really twist the knife, and they're funny enough that they don't have to. 3 out of 4 stars.
Posted by Bob Ignizio at 1:23 AM