At Berkeley (December 5th and 6th at the Cleveland Cinematheque)

[AT BERKELEY screens Thursday December 5th at 6:45 pm and Friday December 6th at 7:30 pm at the Cleveland Cinematheque.] 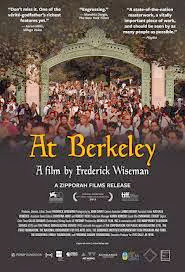 I've been starting to Tweet my dreams, when they can be summarized to 180 characters (and if I remember them, and if they're at all entertaining). You can follow and psychoanalyze me at "#cassxdy" if you care. And I'll save you the trouble and bandwidth at present by telling you my most recent odd dream right here and now.

In the dream I was newly hired at some kind of TV production company, one behind a popular British CSI-crime drama. These studios were located near or in downtown Cleveland. There was no glamour; the reception-area looked like an old concrete garage or repurposed warehouse, with a few other businesses leasing space. There was a constant stream of delivery folks, of acting and crew hopefuls and my job, part-time and rudimentary, seemed to be as a doorman or something. I wasn't even certain what my working hours/days were, making it worrisome how I was to fit this in between my other minimum-wage going-nowhere part-time jobs. Oh, and for some reason as I came to work I had no pants on. I was hoping nobody would notice.

Like all my dreams, this one had a bizarre, absurdist detail that I'm certain you all spotted right away. The fact of a UK TV cop show being done in Cleveland, Ohio? The classic motif of a dreamer being indecent in public?

No, the insane thing is the concept that there could be an actual job opportunity in Cleveland. Add to it that Charles Cassady apparently got the job, and you're in  Arkham Asylum territory.

Yes, lack of jobs is one of the themes of my life. And to think I went to an overpriced pseudo Ivy-League university (Syracuse, which gets a plug in the Twilight books, for some reason) on the proposition that the prestige would help in the employment field. I was grossly misinformed.

Yet another recurring dream-theme from which I suffer is that, with my career in journalism/communications in ruins, I am compelled to go back to college, to take up another major (hence throwing more of my family's good money after bad) and graduate with some degree that companies might conceivably value.

I have this return-to-university dream with alarming frequency. In it there are no binge-drinking frat parties, no co-ed sex, no drug-fueled spring breaks with friends. There never was any of that for me in reality in the first place. No, in the dreams I have  the familiar frustrations of not being able to find my classes/dormitory, not having studied properly for the finals, losing all my class syllabi, and occasionally showing up in public without my pants. And the general here-we-go-again vibe that my encore college term is, like the last one, another utter waste of time that will not bring me a step closer to wage earning.

So I guess watching Frederick Wiseman's total-immersion documentary AT BERKELEY is a déjà vu experience. Wiseman - and the voyeur viewer - go to college.

Wiseman, the grand old man of "direct cinema" nonfiction filmmaking, has had a mostly unchanging, career-long MO. He checks out some well known institution, conveying a fair sense of borderline-drab objectivity with his long takes of talking heads, and fleeting moments and processes presented without soundtrack music or flashy editing. Wiseman's subject here is the legendary University of Southern California-Berkeley, for what bids to be a depiction of American higher-education in the recession-wracked 21st century.

The school is described early on as a West Coast attempt to reflect Yale or Harvard back East, and eventually evolving a strong tradition of progressive and innovative thought. Well, whatever. The weather's nice, anyway, even though Gov. Schwarzenegger's California is an economic mess, with budget cuts trickling down to the USC family. Cleveland-style malaise comes up early on, as Berkeley's top-level administrators try to come up with policies to persevere as an eminent learning institution in a time of diminished resources. A savvy girl in a class makes a good point (though she's still annoying, in the unique way that only vocal college girls can be) that unemployment and foreclosure always existed in her ethnic-ghetto hometown. It's only when it started invading the middle-class suburbs of her affluent Anglo classmates that recession became a hot topic.

Wiseman's cameras then plunge into a general view of campus life. A quirky string-quartet performance (of the Disney ALADDIN music). Professors and student-assistants lecturing on the Big Bang and the nature of time, cancer, Thoreau, or the habits of the T.Rex. A field-hockey game. And, speaking of dinosaurs, inevitably, an old 1960s leftover telling the young generation of the school's heritage of activist-dissent. Compare-contrast that with a meeting between Berkeley high-ups and city officials, discussing crisis-management and police cooperation whenever the students take it into their heads to seize a building or two in their civil-disobedience antics.

At some point we must address the elephant in the room: that Frederick Wiseman commonly shoots enough footage to bury, well, an elephant in the room. AT BERKELEY is four friggin' hours long. Holy Peter Jackson, Batman, that's longer than this damn review. That's longer than most young people today can afford to attend college. That's so long that Cinematheque audiences who actually sit all the way through AT BERKELEY are in danger of being charged tuition, by the Cleveland Institute of Art, by Case Western-Reserve University - whoever is more money grubbing, now that Peter B. Lewis is no longer alive to dole out endowments as he pleases. Don't worry, though. I hear student loans are available...

The irony with Berkeley, we are told, is that while student enrollment is suffering, corporate investments in college R&D is booming. And we see an impressive robot, and a man learning to walk with the assist of computerized leg braces. Not IRON MAN, but close as you get in real life. Clearly, important stuff is happening here, not just poetry class. Still, it takes a while for the narrative, such as it is, build steam, with an "Occupy"-type student protest against high fees in particular, demanding free education and the overthrow of everything in general (like, down with the Man and the corporations, maaaan!). It is not lost on the filmmaker and the audience that the middle-aged administrators receiving the student protesters' wrath were themselves once young peacenik protesters and idealists.

Those in search of important propositions about the state of higher education will doubtless find that material here. Casual viewers might just nod off.

It is interesting to me that the most face time goes to graying faculty and staff. There are extensive stretches in the picture when students - until they angrily demonstrate - are invisible or incidental in Wiseman's lens. Maybe the Berkeley kids refused to cooperate on principle with an old white male. I must say, however, that being an unimportant statistic was how I felt at Syracuse. I was just one trivial sucker, out of whom my parents' money was propping up the academic edifice and guaranteeing cozy pensions for my professors. Most of whom had left the dying field of journalism, in which they could not sustain themselves, to became pedagogues and...churn out more jobless young journalists! Isn't that nutty? Probably goes double for filmmakers/film instructors.

No, when brick-and-mortar universities start reflecting the Great Recession by shrinking and shutting down, just as our newspapers and manufacturers did, I don't think my alma mater can count on me for donations to keep going. At least USC-Berkeley, if it sometimes becomes California's largest Wal-Mart, has Wiseman's movie as a snapshot of just before the downfall..

Me, I'm going back to sleep. Maybe this time I'll get a phone number for that job opportunity. (2 1/2 out of 4 stars)