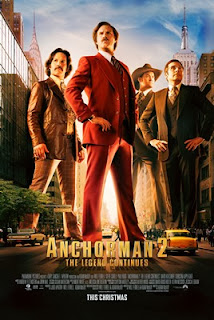 Hard to believe it’s been almost a decade since Will Ferrell introduced the world to everyone’s favorite mustached misogynist newscaster in ANCHORMAN:  THE LEGEND OF RON BURGUNDY.

Don’t remember Ron?  Of course you do.  He’s kind of a big deal.

A pseudo-sequel emerged in WAKE UP, RON BURGUNDY—a hodgepodge assembled from ANCHORMAN edits and outtakes that had the news crew trying to nab a gang of bank robbers—but Ferrell fans have been clamoring for a proper follow-up since 2004.

ANCHORMAN 2: THE LEGEND CONTINUES fast-forwards Ron and friends to 1980, where rapidly-changing technology and workplace dynamics find our hero unemployed and aimless.  Burgundy’s still got his trademark ‘stache, but losing his high-profile gig is enough to bruise even his inflated ego.  Despondent enough to entertain a buffoonish suicide attempt, Ron leaves his upwardly-mobile wife with their precocious 6-year old son and takes odd jobs—like introducing dolphins at Sea World while in a drunken stupor.

Ron gets a second shot at stardom when entrepreneurs tap him and his crew for their new ‘round-the-clock cable TV station, Global News Network, based in New York.  Burgundy agrees—but must first collect his old friends, who’ve all started new lives as a photographer (Brian), restaurateur (Champ), and corpse (Brick).  After a sidesplitting RV crash involving scorpions, bowling balls, and retro cans of Miller Lite, the guys make it to the Big Apple and settle in to their new home at GNN.

But Burgundy is relegated to the graveyard shift and must compete with younger, hipper (and equally photogenic) Jack Lime (James Mardsen) for prime time consideration.  Moreover, the racially insensitive lout is forced to reconcile having a strong-willed African-American woman for a boss (Meagan Good) and answer to GNN’s mush-mouthed Australian owner.

Oh, and he and Brian smoke crack cocaine on air.

Program director Linda Jackson (Good) is incredulous until she sees Ron’s numbers, at which point she determines to bed the suddenly shy Burgundy—who embarrasses himself trying to “assimilate” to Linda’s family with exaggerated jive talk.  Meanwhile, Victoria begins dating a pony-tailed psychologist (Greg Kinnear) and chastises Ron for selling their son short and filling his head with voodoo (after giving him lacy lingerie for a superhero costume).  Some of the film’s funniest bits derive from Burgundy’s interaction with his kooky kid and reaction to his wife’s New Age beau.

Ron and the guys enjoy newfound success in NYC, getting perms and doing celebrity endorsements.  Even socially-inept Brick finds love, falling for a dimwit receptionist (Kristen Wiig) who can’t answer the phone—and whose idea of a hot date involves hanging around Laundromat pop machines.  But Ron’s rapport with the guys sours when his Crocodile Dundee overlord demands he scuttle Brian’s serious story on airplane debris, citing GNN’s “synergy” with corporate interests.

Thanks to an ice skating mishap that leaves him temporarily (and riotously) impaired, Burgundy isn’t able to set things right with Brian and the boys.  Victoria offers to help—but even she’s got ulterior motives—and soon the race is on for Ron to “stay classy” and do right by his friends, family, and the news itself.

Is ANCHORMAN 2 as funny as the original?

Close call.  The sequel packs just as many laughs, but it’s clear the writers and actors had to work harder for them.  Some punch lines don’t pay off, while others feel recycled from other Ferrell comedies (director / longtime Ferrell collaborator Adam McKay returns).  There’s another jazz flute routine and reference to Brian’s preferred cologne.  Baxter the dog grapples with a shark instead of a bear, onscreen subtitles relaying the pooch’s thought patterns.  There’s another battle royal between rival news teams (BBC, ESPN, MTV, The History Channel, etc.) that features a Minotaur, a were-hyena, and the ghost of Stonewall Jackson—and memorable cameos by several Hollywood A-listers (Liam Neeson, Harrison Ford, Will Smith).

We teared up laughing a few times, but the element of surprise is missing here:  We already know Ron is a chauvinistic bigot, Brian a womanizer, Champ doesn’t really know sports, and that the childlike Brick is as thick as…well, you get it.   Accordingly, the biggest belly laughs come when the characters are thrust into unfamiliar situations and environs—like Ron’s inter-racial tryst and hilarious lighthouse recuperation.  Burgundy’s vocal warm-ups, baby-talk, and scatological exclamations still amuse.  There’s also a wedding and a funeral, but not enough fresh material to warrant a two-hour running time for a potty humor picture.  At least half the jokes and sight gags are sexual in nature, justifying the PG-13 rating and flirting with R status, so it’s not appropriate for younger viewers (who may have loved Ferrell in ELF).

We appreciated the filmmakers’ attention to detail in recreating early ‘80s fashions and décor (even if just for kicks) and the not-so-subtle nods to trends and technology that would emerge in the ‘90s and ‘00s.  Burgundy calls his recruiter a “stupid asshole” for thinking 24/7 news television will ever work.  Brick and Chani drink Tab and RC Cola.  There’s a reference to Pong, and “Yacht Rock” songs by Kenny Loggins, Christopher Cross, Neil Diamond, and England Dan / John Ford Coley echo the touchy-feely sentimentality of the times. 2 ½ out of 4 stars.