[WILD GIRL WALTZ is currently shopping for a distributor.] 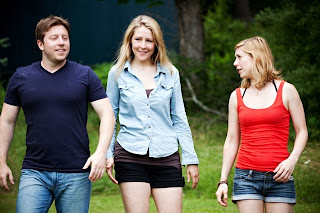 I admit it, I really didn't want to watch WILD GIRL WALTZ. It was an unsolicited screener sent to the Cleveland Movie Blog P.O. Box for a film with no distribution and no familiar names in the cast or crew. The info included with the disc noted that it was shot in 8 days for ten thousand dollars, and that it was going for the feel of a 90's indie film like CLERKS or DAZED AND CONFUSED. Now, I've seen a lot of films made on this budgetary level over the years, and while there certainly have been some good ones, I'd say I generally have to watch 9 crappy backyard zombie epics or necrophiliac serial killer movies with barely enough plot to hold the gore scenes together to find one sincere, watchable effort. Thankfully, WILD GIRL WALTZ turned out to be that 1 in 10 good one, and with not a zombie or severed head to be found.

The setup for WILD GIRL WALTZ is that Angie (Christina Shipp) has just been doused with a strawberry milkshake by a couple of rednecks out driving around and acting like assholes. Angie calls up her friend Tara (Samantha Steinmetz), who just happens to be dating Angie's brother Brian (Jared Stern), to get a ride back to her brother's place where she can clean herself off and vent a bit. To help her friend get into a better mood, Tara offers Angie her pick of two pills she's been given by a druggie friend. Both pills are unknown quantities; all Tara knows is that each will kick the ass of the person taking them in different ways. With nothing else to do in their dull small town, the girls roll the dice. Before long each is indeed in an altered state, Angie having evidently taken a hallucinogenic along the lines of LSD, Tara having apparently ingested ecstasy. With the girls not in full control of their faculties, Brian is forced to become their reluctant babysitter until the effects of the drugs wear off.

There's not really much of a plot, per se. The three characters just sort of hang out and talk, every so often moving on to new locations and occasionally interacting with other minor characters. The drug use is portrayed in a realistic and mostly positive light, the characters alternating between fairly profound (at least to them in that moment) conversations and self analysis, and fairly absurd, playful behaviors. Humorous situations arise, witty barbs are hurled about, and eventually everyone comes down with no ill effects which, the genuine risks inherent in taking any drug, legal or illegal, aside, is more often than not how such situations play out in real life. As an added bonus there's a final cute, touching moment that Brian experiences in private.


Anyone who has seen more than a few films made on this budgetary level (we're talking around ten grand) knows how rare it is for them to have competent actors, but the cast of WILD GIRL WALTZ is surprisingly strong. All three of the leadsinhabit their characters to the point that they manage to sell even the clunkier lines of dialogue like it's the way their characters would talk. Although obviously shot on video, the shots are well composed. Just as importantly, the editing is tight: WALTZ clocks in at 82 minutes, which seems like just the right amount of time to spend with these characters given the threadbare scenario. There's an aside involving Brian and some guy who owes him money that doesn't really pay off and feels like padding, but otherwise the film flows really well. 3 out of 4 stars.