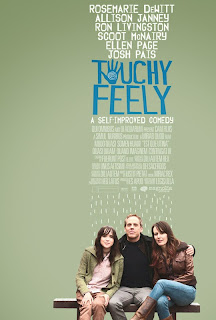 TOUCHY FEELY is yet another facile indie film populated by characters who are little more than the sum of their quirks dealing with banal, self-created issues that are the very definition of “first world problems”. The particulars here are that massage therapist Abby (Rosemarie DeWitt) suddenly develops a revulsion to human skin right after deciding to move in with her boyfriend Jesse (Scott McNairy). Simultaneously Abby's brother Paul (John Pais) seems to develop the power to heal the patients at his dental practice merely by touch, leading him to take reiki classes from Abby's teacher Bronwyn (Allison Janney).

Not all is well with Paul, though, as his daughter/dental assistant Jenny (Ellen Page) is starting to feel stifled both living and working with a dad who doesn't respect her abilities. Jenny also worries that her dad wouldn't support her decision to go to college, so she fills out applications but never mails them. The whole thing is sprinkled liberally with new age philosophizing and talk about “energy”.

While dramadies about self absorbed people who turn minor problems into major life obstacles are as a rule not my favorite genre to begin with, there are some I have enjoyed more than others. In fact, writer/director Lynn Shelton's previous film YOUR SISTER'S SISTER could fit that description, but the quirk was dialed down enough in that film to allow the cast to create believable characters, even if the plot and situations were a bit ridiculous. It also helped that SISTER was genuinely funny.

Here, I'm not even sure what Shelton's going for. If TOUCHY FEELY is intended to be a comedy or “dramedy”, it's just not funny. If it's meant to be taken seriously, it's far too lightweight and burdened with painfully on the nose symbolism, like Abby's aversion to touch representing a fear of intimacy.

If there's a saving grace to the film at all, it's the cast. In particular, Ellen Page does some really good work here, managing to make a fairly goofy character arc almost believable. But in the end, this is left coast upper middle class liberal pablum at its most vapid (and I'm saying this as more or less a liberal myself), capped off by a rushed, pat resolution in the last ten minutes that wraps a neat but unsatisfying little bow around everything. 2 out of 4 stars.
Posted by Bob Ignizio at 12:00 AM