The Wicker Man (December 3rd at the Capitol Theatre)

[THE WICKER MAN screens Tuesday December 3rd at 7:00 pm at the Capitol Theatre. One show only!] 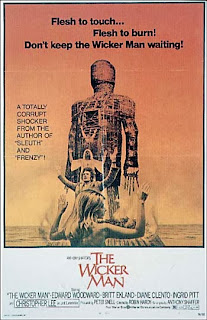 I am given to understand that both the CARRIE remake and the Princess Diana biopic both did poorly at the American box office. Good. I think horror movies get way too much attention as it is. Rimshot!

But one that's worth a second look is THE WICKER MAN, the 1973 UK suspense masterwork that, even in its day, was counted up with the great, taboo-nudging, game-changing chillers of the era, such as THE EXORCIST and ROSEMARY'S BABY. But THE WICKER MAN got a somewhat scattershot release, and while home-video revived the film for a generation of fans who only knew the thing by reputation and veneration, there have been repeated charges that filmmaker Robin Hardy's original version got all cut up and censored and may indeed be considered `lost.'

Well, now there's what bids to be the definitive "final cut" based on newly recovered celluloid. Yeah, right, like how a new "director's cut" of BLADE RUNNER comes out every few years, every time the distributors and Ridley Scott decide they need some extra residuals. At least any ballyhoo to get fans going to see THE WICKER MAN again may help soothe (though not erase; nothing can) the painful memories of Neil Labute's ill-conceived, more violent, Americanized WICKER MAN remake of a few years ago with Nicolas Cage.

The original WICKER MAN, as just about any kid who grew up in the early 1970s reading Famous Monsters of Filmland magazine knows, begins with the arrival by seaplane of a Scottish police Sgt. Howie (Edward Woodward) to the remote island community of Summerisle. He is following up on a letter complaining that one of the local girls has disappeared. The blissful villagers, however, deny that the child ever existed, and even her own mother is part of the apparent coverup.

The pious Sgt. Howie - who is also a lay minister - is repeatedly shaken by what he finds in the commune-like Summerisle, where folks seem openly "heathen." The town church is long abandoned, and in school the kids learn spells and fertility rites. Naked couples make love in the open air at night, and men in a pub sing lewd ditties (there really are so many songs and ballads that the flick might be classified a musical) about the owner's sexy daughter (Britt Ekland), who later tries so hard to seduce Howie that the lawman locks himself in his room.

When Howie visits the village's authority, aristocratic Lord Summerisle (Christopher Lee in one of his best roles), the blueblood explains that his ancestor, a practical, science-minded autocrat, banished Christianity from the island and deliberately returned the once-miserable peasants to their pleasant old religion of Celtic earth spirits and quaint mysticism, centering these born-again pagans on procreation and harvests of the exotic fruits and apples that are Summerisle's economic and cultural foundation.

Howie is now sure the missing girl is a planned sacrifice to the gods on May Day to guarantee a bountiful harvest. The "twist" ending of the drama is no great surprise, but that doesn't make THE WICKER MAN any less creepy or uncomfortable. This is not a conventional "boo" horror flick for kids (nothing really supernatural happens), but a provocative piece about the nature of evil, or if it can even be defined as such in the neo-Druidic setting invoked by Hardy. Unlike Transylvania or typical Hollywood haunts, Summerisle is a Eden-like setting, and everyone seems happy, friendly and content - as long as the harvest goes well. One might argue that THE WICKER MAN makes a pro-Christianity statement, since it shows dire consequences of a society that goes the opposite way, but that's a pretty subjective verdict. Discuss, especially at that big Bedford pagan gathering every year that nobody much publicizes.

I am not as deeply into WICKERlore as other cult-movie fanatics (and this is a "cult" movie, in more ways than one), and I am given to understand that an obscure novel called Ritual, by David Pinner, is given as the uncredited inspiration. But know that I once read screenwriter Anthony Schaffer's very detailed novelization of THE WICKER MAN, which gave quite a bit of in-depth background on the movie's philosophies.

(And I had time to read it because, once upon a time, I was on jury duty downtown, where I had nothing much to do except read all day in the Justice Center. They have a whole DIY library there in filthy downtown Cleveland made of paperbacks that jurors have left behind over the years, and when my term was up I contributed my Wicker Man, as well as some horror-sci-fi/fantasy collections by Richard Matheson, including his original books that became THE INCREDIBLE SHRINKING MAN and I AM LEGEND. Such material was practically nonexistent in the jurists' cache of romance novels, military- technothrillers and board games. I wonder if any jury verdicts came out different because of my bizarre little donations. Maybe someone was sentenced to be burned at the Maypole or something, all because of me. I was thinking my revenge on this city might have been a little more spectacular, kind of like a GHOSTBUSTERS climax, but baby steps... baby steps...)

I cannot claim to have seen this new `final cut' WICKER MAN either, but Elyria filmmaker and Cleveland Movie Blog occasional contributor Chip Karpus has. He detected not all that much radically changed, except for a few lyrics of a bawdy ballad altered here, a clunky expository line about apples restored, and now Christopher Lee's key character has an earlier visual introduction. Aside from that, Chip said, the real good parts are in the DVD extras and commentaries.

Chip and everyone else agrees that if you value your WICKER-manity, please avoid at costs the recent "official" sequel THE WICKER TREE. Which of course paves the way for that one coming back a few years in a "we-were-just-kidding-here's-the-real-cut" re-release version. Worked for HIGHLANDER 2: THE QUICKENING. (3 1/4 out of 4 stars)