The Canyons (November 9th and 10th at the Cleveland Cinematheque)

[THE CANYONS screens Saturday November 9th at 7:25 pm and Sunday November 10th at 8:25 pm at the Cleveland Cinematheque.] 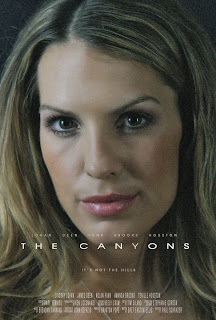 Paul Schrader’s Calvinist upbringing probably explains his career-long obsession with (and revulsion to) sex. That yin-yang has been a key component--you might even call it the raison d’etre--of his
oeuvre. In films like TAXI DRIVER, HARDCORE, AMERICAN GIGOLO, and THE COMFORT OF STRANGERS, Schrader’s authorial voice has mixed voyeurism with disgust, even dread. Not surprisingly, he’s even conflated sex with death on more than one occasion (e.g., his harrowing 2002 Bob Crane biopic AUTO FOCUS).

Schrader’s last two movies (THE WALKER and ADAM RESURRECTED) were critical and box-office duds, devoid of even scholarly interest. But his latest, THE CANYONS, ranks among the finest work of his career. Ironically, it’s one of the rare Schrader-directed films not written by him. Scripted by Bret Easton Ellis of “American Psycho” fame (or is that infamy?), it’s an uber-stylish, wildly provocative look at contemporary SoCal manners, mores and murder.

The film’s visual scheme is cooly, moodily monochromatic. When primary colors suddenly appear, it’s almost a shock. The experience--more than a little unnerving--is akin to staring into an aquarium filled with a particularly exotic species of fish. Tara and Christian seem to be floating in a chemical-induced sea of ennui: they’re like modern-day (American) variants of the beautiful people Fellini immortalized in LA DOLCE VITA. Yet only TMZ addicts would (could?) describe their disaffected lifestyles as “glamorous” or remotely desirable. “Welcome to L.A.” indeed.

I described Lohan’s performance as “heartbreaking” because it’s a touching reminder of what the former child star is capable of. And of all the great performances we missed because of Lohan’s ongoing personal travails. Not surprisingly, it’s also the first time she’s worked with a first-rate director since costarring in Robert Altman’s PRAIRIE HOME COMPANION seven years ago.

Deen has the “look” and charisma of someone who could easily cross over to mainstream projects if he so desires. (He gives great smolder.) Funk and Amanda Brooks (as Ryan’s girlfriend and Christian’s personal assistant) bring such effortless naturalism to their roles they seem less like movie characters than real Los Angelenos you might find networking in a trendy West Hollywood bistro. After a couple of misfires, Schrader has once again returned to the land of the living. Rarely has a filmmaker’s kinks and peccadillos so indelibly fueled their art. 4 out of 4 stars.
Posted by Bob Ignizio at 12:00 AM