Space Battleship Yamato (November 12th at the Capitol Theatre. One show only!)

[SPACE BATTLESHIP YAMATO screens Tuesday November 12 th at 7:00 pm at the Capitol Theatre. One show only!] 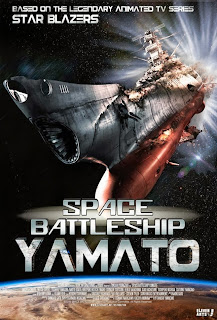 A cult Japanese science fiction anime series form the seventies gets a modern live action movie treatment in SPACE BATTLESHIP YAMATO. The original series aired in the U.S. under the title Star Blazers, and I still remember getting up early (I believe it was on at 7:00 am) to watch it on Channel 43 as a kid, probably circa 1979 or 80. One of the major things I remember about that series that made an impact on me was the way it wasn't afraid to have characters die, certainly not a common occurrence in the kid vids of the day. Still, it wasn't anywhere near the wholesale slaughter seen in this live action version.

Aside from upping the body count, the film version also trims the narrative considerably. That's understandable, given that the original anime series consisted of 26 episodes each intended to fit into an hour long time slot. And to a large degree, the film does a good job condensing the storyline down into just over two hours.


The basic premise is still the same: an alien race known as Gamilas has been bombarding the earth, turning it into a radioactive wasteland. Humanity is now forced to live underground, doing their best to fight back with their dwindling force of spacecraft, but extermination is all but a done deal. And then hope arrives in the form of a message from another planet. Aging ship's Captain Okita (Tsutomu Yamazaki) is put in charge of the massive space battleship of the film's title, and along with a rag tag crew including hot-headed pilot Susumu Kodai (Takuya Kimura), who holds Okita responsible for the death of his brother in a previous space battle. The ship is outfitted with a massive gun and warp capability, both of which are put to considerable use as the Gamilas forces are constantly attacking. Can our Starblazers... oops, I mean the crew of the Yamato... survive the onslaught and get to their destination and back in time to save the earth?


Where SPACE BATTLESHIP YAMATO falters the most is in the way it portrays the Gamilas. Or rather, I should say doesn't portray the Gamilas. In the series, there were distinct members of the enemy forces for the audience to boo and hiss at. Here, we barely see the bad guys, and when we do, their generic CGI monsters with zero personality.

I'm also not thrilled with the decision to make the tone as dark as it is here. It's good to have a film in which even major characters can and do die, but the degree to which this film cuts through its cast of characters is numbing. Where the original series was easily able to continue on in follow ups, I doubt there's enough characters remaining by the end of this film for that to happen here.

The relatively low budget also shows at times, particularly in the film's reliance on static medium shots, and in its less than state of the art CGI. And yet despite those shortcomings this YAMATO is still a well made, reasonably gripping space opera that would probably have fared better with me if I didn't have such a nostalgic fondness for the original series. And yes, I have rewatched the original recently. It's not perfect, either, but it's at least more fun than this update. 2 1/2 out of 4 stars.