Repost: Lovelace (November 3rd and 8th at the Cleveland Cinematheque) 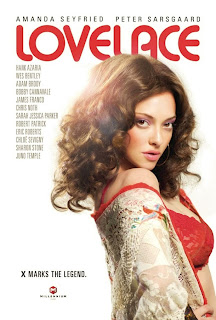 Instead, co-directors Rob Epstein and Jeffrey Friedman and screenwriter Andy Bellin opt to blaze through events at hyper-speed, barely touching on (and at times omitting outright) certain key details. In fact they get through the story so quickly that they have time to go through it a second time, ostensibly to show us the dark underbelly of what we have already watched. This conceit could work, except that the dark underbelly is already pretty apparent the first time around, and the second time around we don't see enough more of it to make much of a difference, with the film holding back from depicting some of Ms. Lovelace's stronger claims against Traynor. There simply isn't enough difference between the film's two halves to warrant the approach.


Although in real life star Amanda Seyfried doesn't bear much resemblance to Ms. Lovelace, the hair and makeup folks manage to pass her off fairly well. More importantly, Seyfried's performance sells us on the complex and at times seemingly contradictory mix of emotions and behaviors that make up her character. Peter Saarsgard has a far more straightforward role to play as Chuck Traynor. Basically, he has to be outwardly likable for about 5 minutes, then play a sleazebag for the rest of the film. For what it's worth, he does so well. The supporting cast includes such notable names as Sharon Stone, Robert Patrick, Hank Azaria, James Franco, and Wes Bentley, but none of them are given much chance to shine. And call it nitpicking if you like, but Adam Brody really needed to grow a more impressive mustache if he was going to play Harry Reems.


The bottom line here is, this just isn't much of a movie. Those unfamiliar with the real life events won't come away from the film much wiser on the subject, those versed in the material will get nothing new, and those just looking for an entertaining or engrossing film will be left wanting. Those genuinely interested in the subject would do far better to watch the excellent 2005 documentary INSIDE DEEP THROAT, which features interviews with just about everyone involved (sadly Ms. Lovelace and her ex-husband Chuck's interviews are archival only, both of them having died only months apart in 2002). 2 out of 4 stars.
Posted by Bob Ignizio at 12:00 AM