Prince Avalanche (November 9th and 10th at the Cleveland Cinematheque) 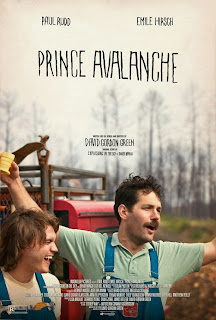 A two-hander with heart, PRINCE AVALANCHE is the latest film by David Gordon Green, a director whose career trajectory ranks among the most unusual in contemporary cinema. Like Richard Linklater, another American regionalist, Gordon Green’s stubborn refusal to be pigeonholed has produced a body of work as eclectic as it is sometimes frustrating. (His long-gestating--and surely doomed--remake of Italian giallo master Dario Argento’s horror classic “Suspiria” seems to have
been abandoned, thank heavens.)

From the faux Malick-isms of GEORGE WASHINGTON (2000) and ALL THE REAL GIRLS (2002), to the stoner commedia dell’arte of PINEAPPLE EXPRESS (2008) and YOUR HIGHNESS (2011) and the gleefully non-p.c. HBO raunch fest Eastbound and Down, Gordon Green has consistently marched to the beat of a different drummer, sometimes to his own detriment. I’m sure even Gordon Green would admit that his chicken-fried 2004 Gothic UNDERTOW was a bad idea.


But PRINCE AVALANCHE--based on an obscure 2011 Icelandic movie never released in the U.S.--is precisely the type of humanist triumph fans knew all along the writer-director was capable of. Set in 1988, the film takes a classic odd couple/buddy movie premise and strips it to the basics.  Alvin (Apatow doppelganger Paul Rudd) and Lance (INTO THE WILD's Emile Hirsch) are hired to paint yellow lines on a lonely stretch of rural Texas highway in the aftermath of some devastating wildfires. Lance is the slackerish kid brother of Alvin’s live-in girlfriend and chafes under Alvin’s task master-dom. A self-improvement junkie (he’s currently studying German) and a bit of a pompous ass, Alvin has little patience for the immature Alvin’s, er, underdeveloped work ethic. Because the job is going to take them all summer (hey, Texas is a big state), they’re going to have to learn to get along, even if it kills them.


Gordon Green keeps it small, local, unforced and yes, ADD sufferers, unhurried throughout. He doesn’t strain for effects--or even “big” moments. Instead, he lets the characters come to us in their own good time. Thanks to splendid writing and Rudd and Hirsch’s spot-on performances, Alvin and Lance seem like old friends long before the end credits.

With its playful allusions to Beckett’s “Waiting for Godot,” PRINCE AVALANCHE at times has the feel of an off-Broadway play transferred to the screen. Yet there’s nothing remotely stagey or claustrophobic about Gordon Green’s open-air handling of the  material. (The entire film takes places outdoors.) Never before has the director’s pictorial--and thematic--appropriation of Terrence Malick’s hushed reverence for nature seemed more organic or apt. (Credit cinematographer Tim Orr, Gordon Green’s longtime DP, for the movie’s shiveringly lovely and Malick-worthy images.)


Whether or not this is a one-off for Gordon Green, the jury is still out. He already has a new film in the can (JOE with Nicolas Cage), and is currently shooting another. Like all great, unexpected gifts from the movie gods, PRINCE AVALANCHE deserves to be treasured since we may never see its like again in the foreseeable future. 4 out of 4 stars.