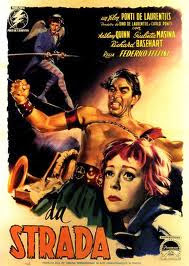 I can't say I know this new Pope Francis from Adam (well, maybe I would know him from Adam). But he has apparently gone on record as naming his favorite movie. Really? That's all anyone can think to ask God's main guy on Earth is what's your favorite movie? Oh, we're doomed.

Well, at least the feature the Pontiff cited is, no, not GRAVITY, not even Marvel's THE AVENGERS, but rather LA STRADA. The 1954 drama was Federico Fellini's most widely admired feature preceding his ultimate move into surrealism and
flights of cinematic fantasy – even though it sticks close to what would be a Fellini trademark bordering on metaphor-for-life cliché, a traveling-circus backdrop. Indeed, it’s amazing that the same hands who rendered this tragic neo-realist classic could later bring forth  JULIET OF THE SPIRITS or AND THE SHIP SAILS ON.

Giuletta Masina, Fellini's actress-wife, is unforgettable as Gelsomina, a mildly retarded waif whose impoverished family practically sells her into slavery to thuggish itinerant carnival strongman Zampano (Anthony Quinn). Despite her limitations, she’s pure-hearted and serves Zampano as an assistant in his rudimentary act. Zampano has only one feat of strength, really, popping a chain across his barrel chest – even other sideshow acts know he's a one-trick bull.

And in the back of his wagon, Gelsomina has to be Zampano's occasional “wife” and sexual plaything while he continues touring the provinces in the mid-20th century. Occasionally they hook up with a big top, but more often than not the pair are on their own, their worse-than-Cleveland career horizons handicapped by Zampano's chronic drinking and whoring. Gelsomina learns to love the calloused lug, in a fashion, though she’s just one of many women the brute has used and discarded throughout his travels. He dimly realizes her simple good nature and worth – but too late.

Hard to believe LA STRADA was controversial in its day, but Marxist-crazed critics and left-wing film cohorts back then in Italy's postwar era thought Fellini had betrayed their comradely cause by not overtly criticizing capitalism and the Church (and Dwight D. Eisenhower and Douglas MacArthur and the United States in general) for being behind Gelsomina's misery. But Fellini kept things simple in this tale with the power of great fable - and a Christ metaphor that the Vatican of then and now approved. LA STRADA is masterpiece from the first frame to the last.

(Parenthetical rant about one of Fellini's old Red cronies; John Ewing, programmer for the Cleveland Cinematheque, recently tried to put together screenings of `classics' by Marxist filmmaker Pier Palo Pasolini, and guess what? The Italians who held the movie rights were asking ludicrous amounts of money to show selected titles - more painful rates than Mr. Ewing had ever seen before, to revive these works for the local lumpenproletariat. The Cinematheque will thus do without some of the Pasolini, uh, delights. Maybe the Italian capitalists involved, had they gotten their extortion, would have generously sent all that money to feed the starving Bolshevik children in some revolution somewhere...but I rather suspect not. Anyone need any more proof of the bankruptcy of the trendy old-line political Left? Whose major achievements throughout the world seem to be higher taxes, ugly socialist architecture, Che Guevara souvenirs and obnoxious public art against NATO commissioned from creative types who aren't all that much more talented than any given graffiti tagger (thank you, Banksy). I just feel I have to emphasize that, for the benefit of readers who don't already know such political realities. Like tenured American university faculty.)

Maybe the Dalai Lama prefers THE AVENGERS, anybody ask him? I'm just trying to help the Cleveland Film Commission out here, in case they're hiring. (4 out of 4 stars)