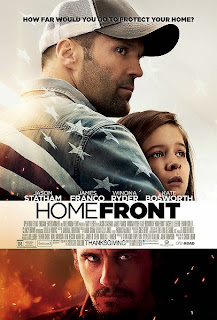 HOMEFRONT, adapted by Sylvestor Stallone from Chuck Logan’s novel of the same name, and directed by Gary Fleder (THE EXPRESS), is about as tactlessly artless a film as I’ve seen. Convoluted, self-serious, maudlin and, worst of all, boring, the movie serves up scene after scene of inanimate meat slab Jason Statham amid a colorless broth of logy contemporary pop culture standbys including motorcycle gangs, meth cooking, and home invasion.

Statham plays Phil Broker, a former DEA agent who, after busting a meth-dealing biker gang and losing his wife to cancer (the biker gang of medical ailments) moves with his daughter to a small Southern town where he aims to nuzzle down into domestic torpor. It isn’t long, however, before nutty local meth chef Gator Bodine (James Franco), discovers Broker’s past. With the help of hooker-with-a-brain-of-cordwood Sheryl Gott (Winona Ryder), Bodine hatches a nefarious plan to secure statewide distribution for his product while eliminating Broker. Hint: the plan involves that biker gang from the beginning.

Somewhere in HOMEFRONT there’s the perfectly salvageable first draft of an Elmore Leonard novel that never was. Between Gott’s nasal drawl and micro-skirts, Bodine’s Ruffle-chomping devilishness, and the crayon-dumb brutality of The Outcasts (laziest name for a motorcycle gang ever), the movie could have easily shot for the white trash neo-noir criminal debauchery of a flick like KILLER JOE.

Instead, it lingers interminably on Broker. He’s what you get when you cross the World’s Best Dad of coffee mug infamy with G.I. Joe and a pot roast, all crammed into an undershirt and perpetually awoken on the wrong side of the bed. One of HOMEFRONT’s biggest problems is that, rather than make Franco’s smirking Gator Bodine into a villainous caricature worthy of playing foil to Statham’s gun-show-ticket-distributing justice steak, it opts to overstuff its half-cocked underworld with henchmen, bikers, tweakers, crooked cops and Ryder’s intolerable “meth whore,” many of whom have competing agendas and none of whom are particularly compelling or smart.

Franco at least looks like he’s having a good time, swaggering through his scenes with a self-aware twinkle in his eye. Ryder, on the hand, is depressingly mediocre. Perhaps it’s because  I still harbor some ill-begotten adolescent crush on the once-ubiquitous pixie-punk, but I found her overwrought southern drawl intolerable, her forceful effort at trashiness all too transparent.

Jason Statham, meanwhile, is simply an innocent bystander of ludicrously bad casting. His macho visage glaring across the poster rightfully signals a brutish, fun, knuckle-dragging actioner - PANIC ROOM by way of THE TRANSPORTER, or maybe even Roland Emmerich’s HOME ALONE. Sadly, for a holiday blockbuster written by an action star, HOMEFRONT has very little action.

Most of Statham’s time is wasted between scenes of teeth-gritted, monosyllabic trash talk and a completely sidelined romance with a school guidance counselor, not to mention one too many sunbeam-kissed father-daughter horseback rides that look like they were shot on location in Happy Gilmore’s happy place.
The latter demonstrates one half of Fleder’s less-than-subtle directing technique: film the good guy amidst verdant shrubbery and exultant spears of golden light. The bad guys? They get ramshackle hovels decaying through a wash of sickly greens and browns.

The whole movie limps along like this, playing Broker’s overwrought yen for serenity and domestic quiet against his hillbilly antagonists' selfish will to crime and destruction. It’s a grand conflict that is intended, I think, to stir up genuine feelings, but only succeeds in wailing tunelessly at the heartstrings and playing grade school dress-up with our emotions.


It could be that my expectations for HOMEFRONT were just too low. Here all I wanted was Statham and Franco catting and mousing through a flaming, bloody cinematic wreck of sweat, knuckles, banter and guns. Instead, I got a film that was hellbent on telling a story. A dumb, confusing story. (1 out of 4 stars)
Posted by Matt Finley at 12:01 AM