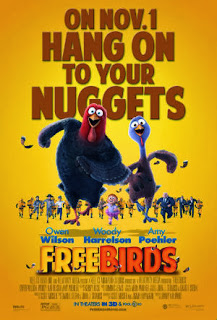 FREE BIRDS, the first animated feature from Reel FX Creative Studios, follows the adventures of a liberated turkey named Reggie as he travels back in time to the first Thanksgiving to undo the events that landed his species on the supper table.  Directed by computer animator Jimmy Hayward (FINDING NEMO, ROBOTS), the plucky cartoon caper is as good (or bad, depending on your taste) as similar fur-and-feather capers from rival CGI zookeepers at Dreamworks and Disney’s Pixar, introducing kids to a flock of fun characters whilst incorporating subtle civics lessons in friendship, teamwork, and loyalty.

Scrawny but intelligent Reggie (voiced by Owen Wilson) is the only turkey on his farm who realizes he and his bird-headed brethren are being raised for slaughter.  His friends—who view the world in terms of corn feed—regard being dragged from the pen as an opportunity to reach “paradise.”  But the turkeys don’t know what to make of all the commotion (a helicopter) when the lantern-jawed President of the United States pays of visit.  Suddenly in fear for their lives, they expel Reggie for easy capture.

Turns out it’s merely a publicity stunt for the president, whose cute-but-narcoleptic-daughter latches onto Reggie for honorary pardon by the Commander in Chief.  Reggie gets to live the good life at Camp David, gorging himself on pizza and romantic Latino television (courtesy the president’s remote control)—until he’s abducted by burly Jake (Woody Harrelson), leader of the Turkey Liberation Front.

Jake claims “The Great Turkey” appeared to him long ago, tasking him with freeing all turkeys from the threat of the hatchet by going back in time and manipulating the events of the first Thanksgiving holiday at Plymouth.  Naturally, Reggie thinks muscle-brained Jake is loco—until they happen upon a secret government research base outside Camp David where, lo and behold, a time travel experiment is underway.

Before you can say “Pass the cranberry sauce,” Reggie and Jake are whisked back to 1621 inside a talking, egg-shaped time machine named S.T.E.V.E. (voiced by STAR TREK’s George Takei, oh my!).  Arriving in New England’s colonial past, the odd couple meets up with a local turkey flock headed by Chief Broadbeak (Keith David) and the husky Ranger (Hayward).  Reggie takes a shine to Ranger’s sister, Jenny (Amy Poehler) and puts off his immediate return to modern day in order to get acquainted as Jake gets chummy with Ranger, his blue-headed analog.

Determined to fulfill his destiny (and promise to The Great Turkey), Jake infiltrates the human camp to destroy Standish’s weapons cache.  The attack only hardens the surly hunter, who redoubles his efforts to find and capture all the birds for a proper stuffing.  Jake and Ranger have a messy falling after the turkey’s hideout is discovered.  Reggie considers taking S.T.E.V.E. back to the future—to his carefree existence—but is conflicted over his attachment to Jenny and Jake (and, by extension, all turkeys).  He gets help making up his mind from a paradoxical visitor from the past…er, future, in the first of many amusing twists borrowing from the conundrums presented in previous time travel flicks like BACK TO THE FUTURE, PART II and BILL AND TED’S EXCELLENT ADVENTURE.  Young kids won’t be able to wrap their little minds around the enigma (adults will have trouble, too—that’s why they’re called paradoxes), but it’s certainly good for a chuckle.

The writers / animators milk a literal sight gag by presenting an elderly turkey with glaucoma, giving Jenny a lazy eye at times of emotional upheaval, and having both Jake and others form binoculars with their feathers.  But hey, it’s good for a few laughs, and Dominic Lewis’ score keeps the feathers ruffled (Social Distortion’s cover of C.C.R. classic “Up Around the Bend” is also choice).

FREE BIRDS is kooky, colorful, and blessedly quick.  Sure, it takes creative license with historical facts for the sake of sci-fi silliness, but parents will appreciate the themes of camaraderie and self-reliance.  Others will laud the filmmaker’s implicit sales pitch for a meatless Thanksgiving menu.  Wilson is his easygoing, flummoxed everyman self and plays well off Harrelson, who’s mild lisp gives him away, and whose militaristic Jake will delight toddlers with his constant flexing of pecs and glutes.  We could make like other writers and simply dismiss this celluloid giblet as being strictly for the birds—but that’d just be fowl.  Hardy-har!