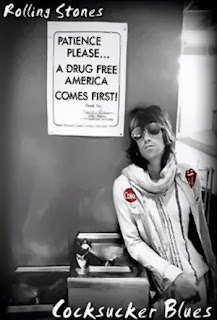 The bad boys of rock & roll, The Rolling Stones, gave photographer Robert Frank full access to film their 1972 American tour in support of Exile on Main Street, their first since the tragic events of the Stones free concert at Altamont in 1968. Frank took the band at their word, filming all (and I do mean all) aspects of life on the road for hedonistic rock stars. The resulting film, COCKSUCKER BLUES, shocked even the band and has never been officially released, although bootleg copies can be found without too much difficulty. And on certain rare occasions, the band allows theatrical screenings at serious film venues like the Cleveland Cinematheque, which is where you can see it make its Cleveland big screen debut on Friday November 15th at 9:15 pm.

The documentary is shot in raw and unvarnished fashion that does its best to simply capture the reality of its subjects, and based on what we see, the band and their crew must have gotten comfortable enough with Frank and his crew that they didn't really think about what they were doing while being filmed. So we see the roadies messing around with naked groupies while members of the band look on laughing, Mick snorting cocaine, and all other manner of general debauchery. We also experience a lot of the tedium of being a band on the road, sitting around hotel rooms, having to answer the same stupid questions from music journalists, doing sound checks, and so on. And occasionally, we even get to witness the band in their element, performing live at the peak of their powers.


It's hard not to feel uncomfortable at some points in the film, particularly the undeniable misogyny of how the groupies are treated. Aside from the musical numbers, there really is very little to be found here that could be considered enjoyable by most viewers. But it does capture a reality that both sordid and dull in which the whole rock n roll fantasy comes off as kind of sad, pathetic, and soul destroying.


Of course at least some of that fantasy has to be true as well, or why else would a band like the Stones still be going on the road some 41 (!) years later, as they did this past summer? It wouldn't be fair to say Frank has done a hatchet job on the band, since (despite a disclaimer at the beginning of the film that says, “Except for the musical numbers the events depicted in this film are fictitious. No representation of actual persons and events is intended.”) the footage we see is real and, presumably, unstaged. But it's clear also that Frank was most interested in the dark side of the rock & roll dream, and through his choices in the editing room that's mostly what we see. Still, given how so many music “documentaries” are little more than promotional puff pieces, Frank can certainly be forgiven for making his film an antidote, and as unpleasant as it is to watch, fans of the Stones and rock music in general should find it fascinating. 3 out of 4 stars.
Posted by Bob Ignizio at 12:00 AM