Big Star: Nothing Can Hurt Me (November 26th at The Capitol Theatre)

[BIG STAR: NOTHING CAN HURT ME screens Tuesday November 26th at 7:30 pm at the Capitol Theatre. One show only!] 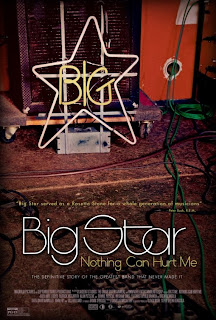 There’s a reason why some bands come and go without ever making an impact.  Hungry for bucks, today’s big record companies unflinchingly drop artists who don’t deliver “X” number of hits in “Y” amount of time.  Other brave niche and boutique imprints give acts time to evolve, knowing full well they may never recoup their investment.

It’s a shame really.  Even back in the freewheeling ‘70s—when labels often let bands find themselves over the span of 3-5 albums before making sales ultimatums—some worthwhile acts just never caught on.

Like many music aficionados, I hit a point some years back where I began spending more time exploring albums and artists from the ‘60s and ‘70s and far less investigating newer acts, whose initial offerings suggest they won’t—and don’t—compare with yesterday’s giants.  I have eclectic tastes and consider myself fairly knowledgeable about all things rock and roll.  I’m well-read, and can rattle off the names of obscure bassists and unheard-of LPs like some guys cite football stats on Sunday.  My vinyl library boasts a copy of Willis Alan Ramsey’s sole LP release, for God’s sake.

So how’d I miss out on Big Star?

I’d heard of Alex Chilton.  The singer / guitarist’s name repeatedly turned up in trade ads for upcoming shows in and around Cleveland up to the late 2000’s.  Regrettably, I never made the effort to check out the roots-rocker or his former band.  Apparently, I wasn’t alone in my indifference.

Drew DeNicola and Olivia Mori set out to rectify this egregiousness with the new Magnolia Pictures documentary BIG STAR: NOTHING CAN HURT ME.  It’s a touching tale of rock and roll rejection and redemption wherein the directors try to sort out why such diverse bands as REM, Wilco, Beck, and The Replacements routinely cite Big Star as a major influence, when most folks never even heard of them.  Piecing together candid interviews, unseen photos, and homemade 8mm film, this 100-minute Behind the Music-styled picture eloquently updates the mythos of the ‘70s soft rockers for modern audiences.  If DeNicola’s primary objective was to show what we’ve been missing out on—and that we’re the lesser for it—well, mission accomplished.

Better late than never, you say?

Try telling that to Big Star’s only surviving member, or the band’s grieving siblings.

NOTHING CAN HURT ME traces the legendary band’s beginnings back to Memphis, Tennessee in the late ‘60s.  Already semi-jaded by his success with The Box Tops (having sung their #1 hit “The Letter”), gravel-voiced Chilton has a chance meeting with up-and-coming troubadour Chris Bell, who fuses Alex’s new material with his own.  Joined by drummer Jody Stephens and bassist Andy Hummel, the young men take advantage of Bell’s access to John Fry’s recording studio at Ardent by work-shopping a batch of jangly, effervescent songs that showcase their writing talent while paying homage to The Beatles, Stones, and Byrds.

Scoring new interviews with Fry and fellow Ardent employees Carole Manning, Jim Dickinson, Steve Rhea, Jim Dandis, and Richard Rosebrough, the directors lay out the history of the Memphis music scene in the dynamic Sixties and discern how Big Star—musical skills notwithstanding—essentially lucked out by cutting their first album in the right place at the right time.

Taking its name and stellar logo from a neighborhood grocery chain more out of ambivalence than pretense, Big Star tracked songs like “Feel,” Thirteen” and “The Ballad of El Goodo” between sessions for other Ardent clients.  Chilton, Bell, and company had all-hours access to the studio and often encamped overnight, abetted by the “bizarre family” of engineers like Dickinson and Rosebrough.

Soul label STAX (who’d been farming out its overflow to the mom-and-pop studio for some time) subsumed Fry’s humble National Avenue facility and financed its relocation to larger, cushier environs on Madison.  Big Star benefited from the merger and move, winding up one of several bands on a new STAX roster devoted to “white” rock.  Their aptly-titled debut, #1 Record, was rapturously received by the press—drawing praise from Cashbox and Billboard—but radio wouldn’t touch it.  The LP was further lost when Columbia gobbled the bankrupt STAX and withdrew promotional support for the promising AOR band, opting to play it safe with its stable of arena rock heavyweights.

In an effort to turn things around, Rhea enlisted promoter John King to “light a fire and bang the drum.”  The men organized the first-ever Rock Writers Convention, inviting established journalists like Cameron Crowe (Rolling Stone) and Lester Bangs (Creem) to Memphis for a weekend of networking and rabble-rousing—with Big Star scheduled as their musical entertainment.  The ploy works, generating a buzz for the band and its overlooked album.

“It was a eureka moment,” says writer Pete Tomlinson, who was ecstatic to even make King’s invite list, much less discover Chilton and Bell.

Fellow Memphis musician / producer Rick Clark agrees.  “'#1 Record' starts with this bravado, on songs like ‘Don’t Lie to Me,’ with the guys playing up these in-the-street moments.  Then it slides into this wonderful melancholy.”

But even as positive word-of-mouth spread among industry movers and shakers, trouble was brewing within. Suffering from undiagnosed mental illness and feeling overshadowed by Chilton, Bell quit Big Star to shop his solo music overseas.  Speaking candidly with the filmmakers, photographer David Bell recalls returning from a business trip to learn of the “trouble at home” with brother Chris.  Offering emotional support and companionship, David traveled to England with Chris to record psychedelic one-offs like “I Am the Cosmos,” but the guitarist couldn’t attract any interest.  Emboldened by his new-found religious faith, Bell continued fighting depression and addiction throughout the decade, only to perish in a car accident at the end of 1978.

Like Jimi Hendrix, Kurt Cobain, and so many other shooting stars, Bell was 27 when he died.

Older brother David oozes pride and love for Chris, who “always knew what he wanted” and, in his estimation, progressed considerably from his teenage years to his Big Star days.  He tells us Chris was working at their father’s restaurant near the end of his life and was taken aback when two Big Star fans tracked him there to gush over '#1 Record' and his later work.

The documentary becomes even bittersweet when Bell’s sister chimes in, tearfully concurring she’d much rather have Chris around today than his songs, however brilliant they may be.  It’s a genuine lump-in-the-throat moment underscoring the humanity that binds even the biggest rock icons to his family, friends, and adoring public.  They’re all people first, prophets second, and might always remain just a dear brother or doting father in someone’s eyes, no matter the godliness ascribed them by fans.

Still, it’s better to have Bell’s songs than nothing at all, and it’s a testament to the man and his music that Mike Mills (REM), Ira Kaplan (Yo La Tengo), and Kliph Scurlock (Flaming Lips) meet with DeNicola to discuss it on camera.  Another musician hits the nail on the head by likening '#1 Record' to “a letter that got mailed, but took years to arrive at its destination.”

Barely able to detach himself from the KISS and Sinead O’Connor titles in his extensive CD library, a still-enthusiastic King explains how he talked Chilton into recording two more LPs as Big Star.  But a similar reception awaited both 'Radio City' and 'Third / Sister Lovers':  Sluggish sales despite widespread praise.

Discouraged, Chilton struck out on his own, never quite eclipsing his Box Tops and Big Star glory before dying of cancer in 2010.  Hummel left music entirely, putting his degree in mechanical engineering to work at Lockheed-Martin until passing away just a few months after Chilton, also aged 59.  The interviews recorded here are among the bassist’s last.

Stephens—who stayed on at Ardent—appears in good health, and comes across as remarkably humble and well-adjusted for someone dealt so crummy a hand.

“Lack of success forces you that much deeper into yourself,” surmises Lenny Kaye (of the Patty Smith Group).  “To me, that’s the best thing about the Big Star story.”   3 out of 4 stars.